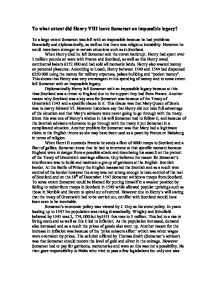 To what extent did Henry VIII leave Somerset an impossible legacy?

To what extent did Henry VIII leave Somerset an impossible legacy? To a large extent Somerset was left with an impossible because he had problems financially and diplomatically, as well as this there was religious instability. However he could have been stronger in certain situations such as in Scotland. When Henry died he left Somerset and the crown bankrupt. Henry had spent over 2 million pounds on wars with France and Scotland, as well as this Henry owed continental bakers �152 000 and had sold all monastic lands. Henry also wasted money on personal pleasures. According to Loach, Henry between 1540 and 1544 had dispensed �250 000 using the money for military expenses, palace building and "pocket money". This shows that Henry was very extravagant in his spending of money and to some extent left Somerset with an impossible legacy. Diplomatically Henry left Somerset with an impossible legacy because at this time Scotland was a threat to England due to the support they had from France. ...read more.

To some extent Somerset could be blamed for putting himself in a weaker position by failing to redistribute troops in Scotland in 1549 while allowed popular uprisings such as those in Norfolk and Devon to spiral out of control. However due to Henry's will stating that the treaty of Greenwich had to be carried out, conflict with Scotland would have been seen to be inevitable. Somerset's economic policy was viewed by J. Guy as his worst policy. In years leading up to 1547 the population was rising dramatically. Wrigley and Schofield believed by 1541 was 2, 774, 000 but by1551 this rose to 3 million. This led to a rise in living costs and as well as this it led to inflation. As the population increased, demand also increased and as a result the prices of goods also went up. Another reason for the increase in inflation was because of the 'price scissors effect' which was when wages were overtaken by prices. ...read more.

The main argument against reform by the conservatives was that Henry wrote in his will that religious reform would not take place until Edward was 18 years old, although this was ignored and in autumn 1547 a doctrine was produced to discuss the state of doctrine in the country. As a result a few reforms were made but this did not satisfy the reformers who demanded more change. Somerset could be blamed for not taking a stronger stance on religion but was left in a precarious position by Henry as he had split from the Church and also the fact that he allowed Edward to be brought up by protestant when the majority of the country was Catholic. This was always going to cause problems. In conclusion although he maybe could have been stronger in certain area such as asserting his authority in Scotland he was largely not to blame as he was left bankrupt by Henry there, was rising population and inflation and as well as this the country was in the middle of religious reform. ...read more.