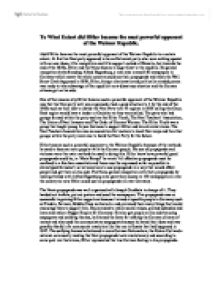 To What Extent did Hitler become the most powerful opponent of the Weimar Republic?

To What Extent did Hitler become the most powerful opponent of the Weimar Republic. Adolf Hitler became the most powerful opponent of the Weimar Republic to a certain extent. At first his Nazi party appeared to be an Extremist party who were nothing special with no new ideas, little recognition and little support outside of Bavaria, but towards the end of the 1920s, Hitler and the Nazis became a huge threat to the republic. He gained recognition by befriending Alfred Hugenburg, a man who owned 150 newspapers in Germany which meant the whole country could see their propaganda and when the Wall Street Crash happened in 1929, Hitler, being a charismatic and politically minded person was ready to take advantage of the republic's now disastrous situation and the German citizens got on his side. One of the reasons why Hitler became such a powerful opponent of the Weimar Republic was that his Nazi party well was organised a had a good structure to it by the end of the 1920s such as their idea to divide the Nazi Party into 35 regions in 1926 calling this Gaue. Each region would have a leader or Gauleiter as they were called. ...read more.

The unifying themes he believed in were German Nationalism, the Fuhrer Cult and a national community making the Nazi propaganda look revolutionary and according to some post war historians, Hitler represented the true German feeling in his propaganda. Hitler's use of violence was another successful method he used to become a powerful opponent of the republic, with the formation of the SA and SS. The SA led by Ernst Rohm were set up to protect the Nazi speakers at first and then were used to fight the KPD's forces and distribute propaganda. They contribute to Hitler's success by creating a proffessional and aggressive image for the Nazis with their disciplined marches and all the violence helped weaken and cause the Weimar Republic problems. The SS was set up to protect Hitler to start off with and was another violent way to get Hitler and the Nazis supporters. Another reason why Hitler became such a powerful person was because of himself, he had great charisma and had many political skills so he seemed to be natural leader as soon as he started speaking out to the early Nazi party. He had strong beliefs and ambitions for his party and Germany and wasn't afraid to speak his controversial racist and nationalist views that he had written in prison even if he did upset many people. ...read more.

This angered Hitler and many people on the right wing as they believed Germany did not start the war and shouldn't be paying any reparations. The 'National Opposition' was formed with the Nazis and DNVP supporting it, to oppose the plan and was led by the media tycoon, Alfred Hugenburg who with all the newspapers he owned could print the opposition's message and gain political exposure for the Nazis as it gave them a chance to make sure everyone was aware of their party and gain support as well. Hitler became the most powerful opponent of the Weimar Republic for a number of reasons. It is debatable which was the most important reason, Hitler was a powerful man who was charismatic and skilled politically with his use of violence and propaganda so seemed to be the perfect, strong leader Germany needed although it might have only been an accident that he gained so much power, if Wall Street had never crashed, Hitler may have never become what he was afterwards. The crash meant that the Weimar Republic was very likely to collapse as the country's economy was a disaster so this gave someone else the opportunity to come in and take advantage and Hitler was the man to do that. ...read more.