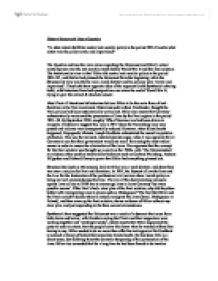 History Homework: Essay Question 'To what extent did Hitler control anti-semitic policy in the period 1933-9 and to what extent was the policy erratic and improvised? The Question outlines the main views regarding the Holocaust and Hitler's actual control/power over the anti-semitic events before World War II and the final solution. The Intentionalist view is that 'Hitler did control anti-semitic policy in the period 1933-39', and that he had planned the Holocaust from the beginning; while the Structuralist view was that he was a weak dictator and his policies were 'erratic and improvised'. They both show opposite sides of the argument (with Synthesis's sharing both), with historians from both perspectives ever since the end of World War II, trying to give the correct & absolute answer. Most if not all Intentionalist historians believe Hitler to be the main force of anti-Semitism in the Nazi movement. ...read more.

Structuralists (such as Mommsen), believe Hitler was a weak dictator, and deny there was ever a set plan for Nazi anti-Semitism. In 1933, the Boycott of Jewish firms and the Law for the Restoration of the professional civil service show Jewish policy as being not well planned during this time. The aim of the discriminating measures against Jews as late as 1938 was to encourage Jews to leave Germany 'by every possible means'. If the Nazi's had a clear plan of the final solution, why did they then bother with immigrating Jews to places such as Madagascar? The fact that Hitler and the Nazis couldn't decide where to actually emigrate the Jews (Israel, Madagascar or Poland), and then came up the final solution, shows evidence of Hitler without any clear plan, and just responding to the then-current circumstance. ...read more.

For much of the period 1933-9 Hitler had shown that he was prepared to be pragmatic, taking into account internal and external pressures, in pursuing his ends. The marked increase in anti-Semitic activity after 1937 may well have reflected Germany's growing power, Hitler's growing contempt for International opinion and the fact that the Conservative old guard within Germany had gone. Hitler's control during this period can be heavily argued from both intentionalist and structuralist viewpoints; and for this precise reason, Synthesism was the sum up the way Nazi's produced increasingly extreme policies. Hitler's ultimate aim in 1938 was forced emigration; it seems very unlikely that he was considering mass murder. Yet, the radical nature of Nazi anti-Semitism was such that completion of one stage would most often lead to the beginning of another, more radical than before. Whilst the thought of genocide almost certainly entered his mind, it is impossible to prove that his main aim in 1938 was to exterminate all Jew's in Europe. ...read more.