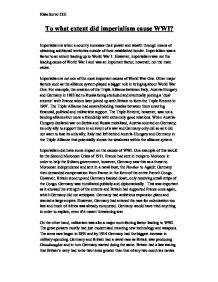 To What Extent did Imperialism cause WWI?

To what extent did imperialism cause WWI?

Imperialism is when a country increases their power and wealth through means of obtaining additional territories outside of their established border. Imperialism was a factor to an extent leading up to World War I. However, imperialism was not the leading cause of World War I and was an important factor, however, not the main cause.

Imperialism is not one of the most important causes of World War One. Other major factors such as the alliance system played a bigger role in bringing about World War One. For example, the creation of the Triple Alliance between Italy, Austria-Hungary and Germany in 1882 led to Russia being excluded and eventually joining a ‘dual entente’ with France whom later joined up with Britain to form the Triple Entente in 1907. The Triple Alliance had several binding treaties between them ensuring financial, political and militaristic support. The Triple Entente, however, was not a binding alliance but more a friendship with extremely good relations. When Austria-Hungary declared war on Serbia and Russia mobilised, Austria counted on Germany; its only ally to support them in an event of a war and Germany only did so as it did not want to lose its only ally. Italy had left behind Austria-Hungary and Germany in the Triple Alliance that potentially shows the weakness within the alliance system.

Imperialism did have some impact on the causes of WWI. One example of this would be the Second Moroccan Crisis of 1911. France had sent in troops to Morocco in order to help the Sultans government, however, Germany saw this as a threat to Moroccan independence and sent in a naval boat; the Panther to Agadir. Germany then demanded compensation from France in the form of the entire French Congo. However, Britain stood up and Germany backed down, only receiving small strips of the Congo. Germany was humiliated publicly and diplomatically.  This was important as it showed the strength of the entente and Britain had supported France once again, which Germany did not anticipate. Germany had ambitious expansion plans and wanted a large empire. However, Germany had entered the race for colonisation too late and much of Africa was already conquered. Germany would have tried anything in order to explain, even if it meant threatening war.

On the other hand, militarism was also a major contributing factor leading to WWI. The great powers mostly had just modernised meaning new technology and weapons. The arms race began in 1891 and by 1914 Germany had the biggest increase in military spending. Germany and Britain had a naval race as Britain was producing Dreadnoughts and in turn Germany started doing the same. Britain had a law stating that Britain’s navy had to be two times greater than that of any two countries navies combined. This showed that the Kaiser was pushing already rocky relations with Britain further in order to become the number one empire in Europe and hence gain power and superiority, shifting the balance of power in Europe. This led to Britain’s hostility towards Germany and in turn its willingness to go to war in 1914.

Furthermore, the crisis in the Balkans did not help ease tensions at all between the Great Powers. Austria-Hungary and Russia on two different sides (Triple Alliance/Entente) both had conflicting interests in the Balkans and had become a great source of tension in Europe. Serbian nationalism was also a key factor. The Habsburg Empire had been trying to repress the nationalism and Serbia was extremely unhappy when Austria-Hungary annexed Bosnia-Herzegovina, however, the gains Serbia made in the First Balkan War of 1912, alarmed Austria-Hungary. The Balkan crisis came to its climax when Austria-Hungary decided for a ‘quick war’ with Serbia to crush nationalism and seize control of the Balkan. However, this play by Austria and Germany was halted by Russia and by extension the fight for the Balkan indirectly lead to the First World War.

However, the assassination of Archduke Franz Ferdinand in Sarajevo in June 1914 was the trigger of the war – the immediate cause. It led to Austria-Hungary seeking an opportunity for the decline of Serbian nationalism. This immediately led to the First World War. The assassination and the events that followed were known as the July Crisis. Without the assassination the war probably would not have occurred as suddenly as it did. Furthermore, pan-Slavism would be the major cause here, as it led to the assassination leading to the political turmoil ending in all out war.

In conclusion, there were many other key factors, which played a large part in the build up to WWI, and imperialism was one of them. However, imperialism was not the key factor and the defining cause of world war one and only played a part to a certain extent.