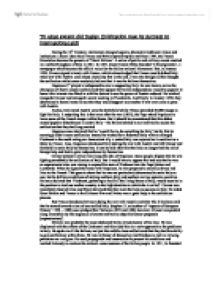 To what extent did Italian Unification owe its success to international aid?

To what extent did Italian Unification owe its success to international aid? During the 18th Century, intellectual changes began to dismantle traditional values and institutions. Liberal ideas from France and Britain spread rapidly and from 1789, the French Revolution became the genesis of 'liberal Italians'. A series of politic and military events resulted in a unified Kingdom of Italy in 1861. In 1847, Count Cesare Balbo founded 'Il Risorgimanto', a newspaper which became the official voice for the Italian national Movement. But, in January 1859, Cavour signed a treaty with France, which acknowledged that France would defend Italy when war with Austria came about. Some say that in the end, it was the foreign aid that brought the unification whilst some resolutely believe that it was the Italians themselves. Napoleon 3rd played a indispensable role in supporting Italy. he was keen to act as the champion of liberal causes and believed that support for Italian Independence would be popular at home. this interest also fitted in with his desires to see the power of Austria reduced. He worked alongside Cavour and arranged a secret meeting in Plombier�s. And finally in January 1859, they determined a formal treaty to say that they would support one another if war ever came to pass with Austria. ...read more.

But France abandoned Cavour during the war with Austria and after this it has been said that he turned towards aims of one unified Italy. Stephen J Lee (author of 'Aspects of European History' 1789 - 1980) once pledged that 'between 1859 and 1860, however, Cavour was pushed along irresistibly by the sequence of events and had to adapt his former proposals [expansionism]'. Mazzini was probably the most dedicated Italian revolutionary of his time. He was displeased with the efforts of the Carbonari and this aided him in a new approach to the problems in Italy. He spoke to all the Italians, not just the middle class and believed that they had the ability to gain unification within them. He was in favour of democracy and freedom as well as viewing patriotism as a religion. He used propaganda and insurrection to present his ambitions and worked tirelessly to awaken the national consciousness of the Italian people. In 1831, he founded the 'Young Italy' which became very popular although he was not adored everywhere he went. The significant factor about Mazzini was that he never appealed to foreign aid when times were severe; he soundly believed that Italy could achieve unification by herself. ...read more.

They worked by the motto of 'Victor Emmanuel, King of Italy' and hoped that monarchists, federalists, liberals as well as professional and higher classes could unite. After the Napoleonic Wars of 1815, Napoleon had left Italy with reforms, which helped unite them, more. He introduced territorial rationalization (which helped reduce the number of states and made them feel more like a country). And a representative government in which the people could vote, improved communications (this proved very beneficial in transporting new ideas around the country), improved commerce, social change (land was redistributed and a commercial middle class began to develop) and the power of the church was reduced. All of these factors helped Italy feel more like one country and this sparked of ideas for a united Italy. And so, in conclusion I would say that foreign aid was a major factor in the unification of Italy. This can be seen through the aid of France in the struggle against Austria. But, in my opinion, I would have to say that foreign influence helped to trigger of the start of the unification process (for example, through the works of Napoleon after the Napoleonic Wars). As Italy became stronger, countries began to back away as they felt that it could be threatening. And so, Italy was left alone and they had to proceed on the long struggle for independence themselves and in the end, they were the ones who achieved it. ...read more.