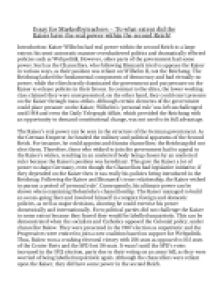 To what extent did Kaiser Wilhelm have the real power within the second Reich?

﻿Essay for Markedbyteachers ? To what extent did the Kaiser have the real power within the second Reich? Introduction: Kaiser Wilhelm had real power within the second Reich to a large extent; his semi-autocratic manner overshadowed politics and dramatically effected policies such as Weltpolitik. However, other parts of the government had some power. Such as the Chancellors, who following Bismarck tried to appease the Kaiser in various ways, as their position was reliant on Wilhelm II, not the Reichstag. The Reichstag lacked the fundamental components of democracy and had virtually no power, while the elites heavily dominated the government and put pressure on the Kaiser to release policies in their favour. In contrast to the elites, the lower working class claimed they were unrepresented, on the other hand, they could exert pressure on the Kaiser through mass strikes. Although certain elements of the government could place pressure on the Kaiser, Wilhelm?s ?personal rule? was left unchallenged until 1918 and even the Daily Telegraph Affair, which provided the Reichstag with an opportunity to demand constitutional change, was not used to its full advantage. The Kaiser?s real power can be seen in the structure of the German government. As the German Emperor, he headed the military and political apparatus of the Second Reich. For instance, he could appoint and dismiss chancellors; the Reichstag did not elect them. ...read more.

This can be seen with Caprivi and Bulow, as Caprivi refused to pass an Anti-Socialist subversion bill, resulting in his dismissal. While Bulow, who introduced Weltpolitik, was constrained by his need to maintain the support of the Kaiser. This meant he was forced to pursue courses of action he did not necessarily support and make compromises, indicating his critical inferiority. Despite pushing Germany onto the world scene and introducing the tariff law of 1902, the Kaiser exercised his dictatorial power by dismissing him following the Daily Telegraph Affair. In contrast to the Kaiser and chancellors, the Reichstag had little power, especially regarding the Daily Telegraph Affair and the Zabern Affair of 1913. The limited power of the Reichstag shows that the Kaiser had the ultimate authority in the German government. Outwardly it was one of the most representative popular assemblies with important legislative functions. Elections were held every three years and deputies enjoyed the right of speech. However, the outward veneer of liberalism was deceptive and power lay very much with the Kaiser, Chancellor and aristocracy. On the other hand, there were moments during the Kaiser?s reign that the Reichstag could exert pressure. This can be seen in the Daily Telegraph affair of 1908. The affair was blamed heavily on Bulow, who was accused of carelessness in allowing the publication of an interview given by Wilhelm to the British newspaper. ...read more.

After 1890, the right wing parties, which usually supported the government, were in decline. In 1887 they gained 47% of the popular vote and 55% of the seats in the Reichstag. Whilst the number of seats for the right-wing parties was declining up to the First-World-War period, the parties were more critical of the government, especially as the SPD were increasing in strength and numbers. However, their failure to remove the Kaiser until 1918 demonstrates how powerful he was. To conclude, the real power lay in the hands of the Kaiser to a great extent. However, the chancellor did hold a significant degree of power as the position allowed him to appoint ministers and preside over the Bundesrat. Furthermore, the Reichstag had little say and this contributed to both the Kaiser and chancellor?s ultimate power. The Reichstag was merely a fig leaf covering the nakedness of absolutism and this was apparent in the Daily Telegraph Affair. Additionally, the Reichsrat could overturn the Reichstag?s decisions and if the Reichstag tried to gain more power, they could be dismissed and new elections would be called. While elite groups had a slice of the Kaiser?s power, it was only a small amount that could enable them to exert pressure for the time being. The middle and lower classes began to vote more for socialist parties as a result of the semi-autocratic regime and this shows that many were becoming disillusioned with the Kaiser?s dictatorial methods. ...read more.