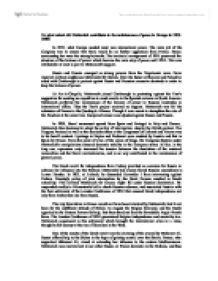 To what extent did Metternich contribute to the maintenance of peace in Europe in 1815-1848?

To what extent did Metternich contribute to the maintenance of peace in Europe in 1815-1848? In 1815, what Europe needed most was international peace. The main job of the Congress was to ensure that there would be no further aggression from France. Hence surrounding her were the strong bulwarks. The territorial arrangement of 1815 preserved the structure of the balance of power which became the main stay of peace until 1853. This was attributable at least in part to Metternich's support. Russia and Prussia emerged as strong powers from the Napoleonic wars. From Austria's militant neighbours Metternich felt threats. Over the future of Saxony and Poland he aided with Castlereagh to protest against Russia and Prussian excessive demands in order to keep the balance of power. At Aix-la-Chapelle, Metternich joined Castlereagh in protesting against the Tsar's suggestion for sending an expedition to crush revolts in the Spanish colonies in South America. Metternich preferred the maintenance of the balance of power to Russian leadership in international affairs. ...read more.

The Greek revolt for independence from Turkey provided an occasion for Russia to advance her influence into the Balkans. Metternich had always feared Russian ascendancy in Lower Danube. In 1821, at Laibach, he dissuaded Alexander I from intervening against Turkey. Canning's policy of joint intervention by the Great Powers resulted in Greek autonomy. This alarmed Metternich for Greece might fell under Russian domination. He responded readily to Palmerston's bid to check Russian advance, and associated Austria with the final settlement of the London Conference of 1832 that ensured Greek independence not only from Turkey but also from Russia. The July Revolution in France would not have been tolerated by Metternich, had it not been for the indifferent attitude of Britain. In August the Belgian followed, and the Dutch appealed to the Eastern Powers for help. But they dared not face the formidable Anglo-French force. The London Conference of 1832 guaranteed Belgian Independence and neutrality too. ...read more.

Indeed, general peace was liable to break down whenever his policy of intervention was applied for it made certain that governments of absolute rulers were unaltered whenever there was a liberal uprising, and expeditionary forces to overrun a country was likely to cause friction among interested powers. Obviously international peace in the years following 1815 was not the result of any deliberate policy of Metternich. An explanation for this striking feature could be that revolutions had served as a kind of substitution for wars. To sum up, Metternich can maintain peace in Europe to a certain extent at the beginning with his own system. However, in the later stage, owing to the growth of liberalism and nationalism and the desire of unification in both Germany and Italy, there was no longer real peace found in Europe. However, no one can deny that Metternich had contributed his effort to maintain the peaceful situation in Europe for the good of both Austria and Europe as a whole. ?? ...read more.