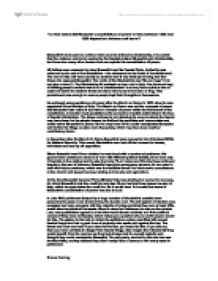 To what extent did Mussolini consolidation of power in Italy between 1922 and 1928 depend on violence and terror?

To what extent did Mussolini consolidation of power in Italy between 1922 and 1928 depend on violence and terror? Mussolini's took years to achieve what could be defined as dictatorship. It is certain that the violence and terror exerted by the fascists helped Mussolini gain dictatorship, but there also many other factors that can explain his consolidation of power. All Italians were expected to obey Mussolini and his Fascist Party. Authority was enforced by the use of the Blackshirts - the nickname for the Fasci di Combattimenti. The men in this unit were usually ex-soldiers and it was their job to bring into line those who opposed Mussolini. The motto of the Blackshirts was "Me ne frego" (I do not give a damn"). The Blackshirts did maintain an iron rule in Italy. One favoured way of making people conform was to tie a 'troublemaker' to a tree, force a pint or two of castor oil down the victim's throat and force him to eat a live toad or frog. This punishment was enough to ensure people kept their thoughts to themselves. He achieved some semblance of power after the March on Rome in 1922 when he was appointed Prime Minister of Italy. ...read more.

People were intimidated into voting for the Fascists and the Fascists took ballot papers from those who might have voted against Mussolini and were brushed aside, which may explain for the Fascists election results and why less votes were taken in. In this sense, the Acerbo Law was an important move to dictatorship in Italy. Mussolini was also very good at propaganda and he showed the Italian people all the other party's weaknesses and as a result persuaded and gained support from the Socialists and Liberals. One incident almost brought Mussolini's downfall, and his power base almost collapsed after the murder of Matteotti, when great anger gripped Italy. Blackshirt thugs did beat up critics but that did not stop Giacomo Matteotti from publicly condemning Mussolini. Matteotti was murdered by fascists and Mussolini was held responsible for this. It is possible that he did order it although this that cannot be proved. There was overwhelming public outrage at the murder, as Matteotti was Italy's leading socialist Member of Parliament. Newspapers and wall posters condemned Mussolini and in the summer of 1924 there was a real possibility that Mussolini would have to resign, which maybe why he went into hiding from the public. ...read more.

A future prime minister would be chosen from a list drawn by the fascist Grand Council. Although it cannot be said that it was just violence and terror, which brought Mussolini to power, it was a major factor and ensured that many of the key reforms necessary to (develop Italy as a Fascist state) or (support Mussolini's rise) could be implemented. His unorthodox methods were careless, unparliamentarily and may explain the 1924 election results. But many people were frightened of the Fascists and were too scared to speak up against Mussolini, as they feared they could end up like Matteotti. It is clear that Italians felt intimated by the Fascist violence and the secret police. Mussolini's skill played a vital role, but he was also helped by the seemingly blind incompetence of his opponents. The Liberals like Giolitti & Orlando were slow to move into opposition and the left wing was divided between many factions, majority socialists, reformist socialists and communists who all distrusted each other. We must also take into account the fact that Mussolini had his fair share of luck and a prime example is the Kings refusal to declare the army to attack the Fascists on the March on Rome, which would never have put Mussolini in power. However it is also clear that without the violence and terror Italy would not have seen the meteoric rise of Mussolini. Kieran Cooling ...read more.