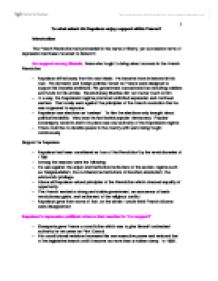 To what extent did Napoleon enjoy support within France?

To what extent did Napoleon enjoy support within France? Introduction The French Revolution had proceeded in the name of liberty, yet successive forms of repression had been mounted to defend it. No support among liberals, those who fought to bring about success in the French Revolution. - Napoleon drifted away from his own ideals. He became more interested in his own. His domestic and foreign policies forced on France were designed to support his imperial ambitions. His government concentrated on recruiting soldiers and funds for his armies. Revolutionary liberties did not matter much to him. - In a way, the Napoleonic regime promoted unlimited expansion and continual warfare. That surely went against the principles of the French revolution that he was supposed to espouse. - Napoleon saw elections as 'useless'. To him the elections only brought about political instability. Very soon he had buried popular democracy. Popular sovereignty caved in and in its place was raw authority of the Napoleonic regime - There could be no durable peace in the country with wars being fought continuously Support for Napoleon - Napoleon had been considered as 'son of the Revolution' by the revolutionaries of 1789 - Among the reasons were the following: - He was against the unjust and ineffective institutions of the ancien regime such as: Seigneurialism, the cumbersome institutions of Bourbon absolutism; the aristocratic privilege - Above all Napoleon valued principles of the Revolution which stressed equality of opportunity - The French wanted a strong and stable government; an assurance of basic revolutionary gains, and settlement of the religious conflict. ...read more.

The Napoleonic Code was in some measure a revolutionary law code that progressives throughout Europe embraced. The Civil Code swept away feudal property relations and gave legal sanction to modern contractual notions of property. The code established the right to choose one's occupation, to receive equal treatment under the law, and to enjoy religious freedom. Liberals would support him here. * At the same time, it gave employers much control over their workers by prohibiting strikes and trade unions. The code did not match property rights with popular rights like the right to basic subsistence. ( Workers who know their rights would not support him) * Revolutionary legislation had emancipated women and children by establishing their civil rights. Napoleon undid most of this by restoring the father's absolute authority in the family. " A wife owes obedience to her husband," said the code, which proceeded to deprive wives of property and juridical rights establised during the 1790s and to curtail the rIght to divorce while establishing a kind of double standard in the dissolution of a marriage. The code expanded the husband's options in disposing of his estate, although each child was still guaranteed a portion. (The question here is would the women support Napoleon. Hard to say here, that being the 18th century) * The prefectorial system of local government, the Civil Code, the Concordat, the University, their Legion of Honour, and the local bodies of notables proved to be durable institutions. They helped Napoleon to create a series of "granite masses" on which to reconstruct French society. ...read more.

- Though not a believer himself, Napoleon felt that it was time to give major concessions to Catholic sentiment. Napoleon however made sure the Church mained under the control of the state. - In 1801 he negotiated a Concordat, or agreement, with Pope: Pius VII. It stipulated that Catholicism was the "preferred" religion of France but protected religious freedom for non-Catholics. The Church was again free to operate in full public view and to restore the refractory priests. Primary education would espouse Catholic values and use Catholic texts, as it had before the Revolution, and clerical salaries would be paid by the state. Though nominated by the ruler, bishops would again be consecrated by the pope. - As a major concession to the Revolution, the Concordat stipulated that land confiscated from the Church and sold during the Revolution would be retained by its purchasers. - On the other hand, the government dropped the ten-day week and restored the Gregorian calendar. - The balance of church-state relations tilted in the state's favour. - Napoleon intended to use the clergy as a major prop of his regime only. - The pulpit and the primary school became instruments of social control, to be used, as a new catechism stated, "to bind the religious conscience of the people to the august person of the Emperor." As Napoleon put it, the clergy would be his "moral prefects." - Devout Catholics resented this subordination of the Church. - Eventually Pope Pius renounced the Concordat, to which Napoleon responded by removing the pontiff to France and placing him under house arrest. 1 ...read more.