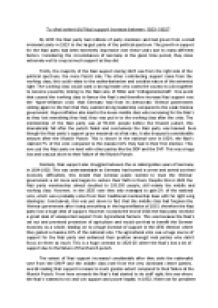 To what extent did Nazi support increase during the years 1923-33?

﻿To what extent did Nazi support increase between 1923-1933? By 1933 the Nazi party had millions of party members and had grown from a small irrelevant party in 1923 to the largest party of the political spectrum. The growth in support for the Nazi party had been extremely impressive over these years due to many different factors. Considering the circumstances of Germany in the given time period, they done extremely well to coup as much support as they did. Firstly, the majority of the Nazi support during 1923 was from the right side of the political spectrum, the more fascist side. The other contributing support came from the working class; this could relate to the authoritarianism and socialist nature of the extremist right. The working class would want a strong leader who wants the country to join together to become powerful, linking to the Nazi view of Hitler and ?Volksgemeinschaft?. One event that caused the working class to favour the Nazi?s and therefore increase Nazi support was the ?hyper-inflation crisis? that Germany had from its democratic Weimar government. ...read more.

Similarly, Nazi support also struggled between the so called golden years of Germany in 1924-1928. This was understandable as Germany had turned a corner and sorted out their economy difficulties, this meant that German public started to trust the Weimar government a lot more and began to restore their faith in them. Despite this in 1928 the Nazi party membership almost doubled to 100,000 people, still mainly the middle and working class. However, in the 1928 vote they only managed to gain 2% of the national vote, which were probably votes from their traditional membership base with far right wing ideologies. Conclusively, this was put down to fact that the middle class had forgiven the Weimar government after losing everything in the hyperinflation of 1923, therefore the Nazi party lost a huge deal of support. However, towards the end of 1928 the Nazi party received a great deal of unexpected support from Agricultural farmers. This was because the Nazi?s set out and promised protection of agriculture and would use that to benefit the German economy ...read more.

We understand that it was a great deal due to different factors, 30% out of the possible 46% of the working class vote went to the Nazi party. However, the Nazi vote did actually drop after all these highs. It dropped by 4% to 33% in the 1932 second vote due to Hitler?s arrogance to not play his part within the government. However, it soon rose to 44% when Hitler came in to power with the decree for the protection of the people and state, he banned the communist party and boosted his parties support. Conclusively, this shows that the Nazi support varied throughout the years and you could describe it as a roller coaster of ups and downs, but overall they came out on top by taking supreme control. The Nazi?s started off by gaining 10% of the national vote in their first election and then moved on to a huge 44% of the vote in their last election. This shows that Nazi support did increase a great deal between the two dates however it did also drop at times like the Munich putsch. ...read more.