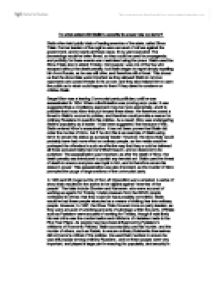 To what extent did Stalin's security in power rely on terror

To what extent did Stalin's security in power rely on terror? Stalin often held public trials of leading enemies of the state, called Show Trials. Former leaders of the regime were accused of crimes against the government, and in nearly all these cases, they were executed. The proceedings would've been filmed, so they could be used for propaganda, and publicity for these events was maximised using the press. Stalin used the Show Trials also to attack Trotsky. He however, was one of the few who escaped without the death penalty, but Stalin began to regret simply expelling him from Russia, as he was still alive, and therefore still a threat. This shows us that the show trials were important as they allowed Stalin to remove opponents who posed threats to his power, and they also helped him to warn the public as to what could happen to them if they dared to condemn or criticise Stalin. Sergel Kirov was a leading Communist party politician, until he was assassinated in 1934. When collectivisation was proving unpopular, it was suggested that a conciliatory approach may be more appropriate, and it is possible that it was Kirov that put forward these ideas. He therefore posed a threat to Stalin's economic policies, and therefore could provide a reason for ordinary Russians to question his policies. As a result, Kirov was endangering Stalin's popularity as a leader. ...read more.

Though the right had expressed opposition to much of the Five Year Plan, there was no strong evidence supporting the Troskyite-Rightst Bloc to which members such as Rykov and Bukharin confessed. Bukharin wrote an article entitled "Notes of an Economist", in which he criticised the Five Year Plan, and made it clear that he opposed the economic policies. He was therefore viewed as a threat to Stalin, as his views could affect those of others. This meant Stalin had to have him executed in order to retain security in power. However, it was not only party officials that posed a threat to Stalin's security. The army's criticisms of collectivisation, meant they posed a threat to Stalin, and so in 1937 and 38, thousands of the Red Army were executed. There was a downside for Stalin to the purges also. With the growth of the purges, the role of the secret police also grew, and as a result, their influence on people increased. To ensure they posed no threat, the purgers themselves, were in turn, purged. The purges then extended beyond the party, as ordinary Russians were arrested. The whole population was living in terror, as anyone criticising Stalin was denounced. As a result, people became scared to be critical of Stalin, and so did not pass judgment on him or his policies. This gave him security in power. ...read more.

Stalin also discouraged religious worship. Increased working hours, and the threat of sacking if work was missed made it hard to attend church, and committees were even set up to weaken religious influence. This was important, as with the decrease of influence from religion, came the increase in influence from Stalin and his policies. The lack of religious influence, and Stalin's control of the media, meant that Russians were only hearing Stalin's ideals, and so would turn more towards his way of thinking, and so in turn, helping to secure his place in power. This I believe is more important than Stalin's alteration of family values, and of his education policies, but still was less effective than the purges. Under Stalin, there were also benefits for some people, and these benefits could be another explanation for his security in power; that many people actually approved of what he was doing. In contrast to Stalin's collectivised farms, his state farm workers received social benefits, and a higher wage. However, these benefits did not apply to many people, and certainly did not affect the majority of Russia in the way that the Great Terror did. Despite the presence of numerous other ways in which Stalin tried to control his power, such as censorship, I believe the most effective, and the most relied upon, was terror. The purges I believe were the most effective way of securing power, as they struck fear into ordinary Russians. Too scared to say anything for fear of death, meant that although many people may have opposed Stalin, nobody dared start a public rebellion. ...read more.