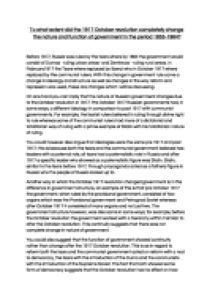 To what extent did the 1917 October revolution completely change the nature and function of government in the period 1855-1964?

﻿To what extent did the 1917 October revolution completely change the nature and function of government in the period 1855-1964? Before 1917, Russia was ruled by the tsars where by 1864 the government would consist of Dumas - ruling urban areas- and Zemtsvas - ruling rural areas. In February1917 the Tsars where replaced by liberal who in October 1917 where replaced by the communist rulers. With this change in government rule came a change in ideology and structure as well as changes in the way reform and repression was used, these are changes which I will be discussing. On one hand you can imply that the nature of Russian government changes due to the October revolution in 1917. Pre October 1917 Russian governments had, in some ways, a different ideology in comparison to post 1917 with communist governments. ...read more.

pre October 1917 the government, when ruled by the provisional government, consisted of two organs which was the Provisional government and Petrograd Soviet whereas after October 1917 it consisted of many organs and not just two. The government structure however, was also same in some ways; for example, before the October revolution the government worked with a hierarchy within it similar to after the October revolution. This continuity suggests that there was not complete change in nature of government. You could also suggest that the function of government showed continuity rather than change after the 1917 October revolution. This is as in regard to reform both the tsars and the communist government acted on reform with a nod to democracy, the tsars with the introduction of the Duma and the communists with the introduction of the Supreme Soviet. ...read more.

Overall I believe that the 1917 October revolution changed the nature and function of government in the period 1855-1964 but not completely. This is because evidence has shown that in regards to nature there is change in ideology between pre 1917 and post 1917 and continuity is little with the similarity of paternalistic figures. The function of the government also shows continuity as their reform within the government was very similar with both heading to democracy. However there is also evidence regarding function of the government which shows change as some of the tsar leaders showed very low levels of repression regarding their function whereas the communist government showed high levels of repression, therefore suggesting that the October revolution presented both change and continuity with the nature and function of government. ...read more.