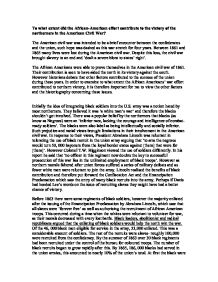 To what extent did the African-American effort contribute to the victory of the northerners in the American Civil War?

To what extent did the African-American effort contribute to the victory of the northerners in the American Civil War? The American civil war was intended to be a brief encounter between the confederates and the union, such hope was dashed as this war stretch for four years. Between 1861 and 1865 many lives were lost during the American civil war. Despite this loss, the civil war brought slavery to an end and 'dealt a severe blow to states' right'. The African Americans were able to prove themselves in the American civil war of 1861. Their contribution is seen to have aided the north in its victory against the south. However historians debate that other factors contributed to the success of the union during these years. In order to examine to what extent the African Americans' war effort contributed to northern victory, it is therefore important for me to view the other factors and the historiography concerning these issues. Initially the idea of integrating black soldiers into the U.S. army was a notion hated by most northerners. They believed it was 'a white man's war' and therefore the blacks shouldn't get involved. There was a popular belief by the northerners that blacks (as know as Negroes) ...read more.

This instilled courage and hope in the black soldiers to fight, a certain advantage for the union. What made their effort worthwhile was the great risk involved in entering the war especially as a black soldier. The south was furious at the Emancipation Proclamation and therefore was determined on executing any captured black soldier. The idea that they might face horrific maltreatment by their captors was feared by all black soldiers. This would have been an encouragement to the black to fight to the death rather than surrender. However some could argue that not all black soldiers died heroically or on the battlefield; but that only 3,000 died in combat, 30,000 died from illness (due to lack of proper medical facilities) and the fate of 4,000 were uncertain. The African American soldiers didn't truly go into crucial battles until 1863. Nevertheless there seems little doubt that the flood of black troops had a positive effect on the union war effort during crucial times when the white Americans were increasingly reluctant to fight in the American civil war. By the end of the war, blacks were a major part of the union army. Not all African Americans fought in the war for instance, runaway slaves often provided useful information about the opposition during the time of the war. ...read more.

This became a key turning point for black Americans. Although the raising of black troops was unpopular at the start, opinions began to change as the black troops proved themselves in battles. A private of the 89th Illinois wrote after the battle of Nashville 'I have he[a]rd men say that they would not fight beside a Negro soldier but... whites and blacks charged together and fell as well as we did...' this source suggest the change of attitude towards the use of black troops in combat. It gives a positive feedback of their contributions to the war. The confederacy also commenced integrating blacks into their army in later stages of the war as they faced defeat in the American civil war. The General Order 14 signed by President Jefferson Davis on March 13 1865 saw the use of African American soldiers for the first time in the confederacy. This does suggest the mere importance of the use of blacks in the war. If they felt there was a chance of victory with the help of the blacks, perhaps this pushed them to issue the order. This clearly supports Eric Foner's point that the African American soldiers did play a crucial role. Even Lincoln's speech suggests the crucial importance as he proclaimed in September 1862 that 'if I could save the union without freeing any slaves I would do it...' ...read more.