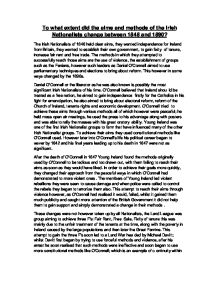 To what extent did the aims and methods of the Irish Nationalists change between 1848 and 1890?

To what extent did the aims and methods of the Irish Nationalists change between 1848 and 1890? The Irish Nationalists of 1848 held clear aims, they wanted independence for Ireland from Britain, they wanted to establish their own government, to gain fixity of tenure, increase fair rent and free trade. The methods in which they attempted to successfully reach those aims are the use of violence, the establishment of groups such as the Fenians, however such leaders as Daniel O'Connell aimed to use parliamentary techniques and elections to bring about reform. This however in some ways changed by the 1890s. Daniel O'Connell or the liberator as he was also known is possibly the most significant Irish Nationalists of his time. O'Connell believed that Ireland should be treated as a free nation, he aimed to gain independence firstly for the Catholics in his fight for emancipation, he also aimed to bring about electoral reform, reform of the Church of Ireland, tenants rights and economic development. ...read more.

of the tenants at the time, along with the poverty in Ireland caused by the large populations and then later the Great Famine. This attempt to gain the three F's soon led to a Land War headed by Michael Davitt; whilst Davitt first began by trying to use forceful methods and violence, after his arrest he soon realised that such methods were ineffective and soon began to use more constitutional methods like O'Connell; which is an example of continuity within the Nationalists. There approach like O'Connell's also included the use boycotting, propaganda in the form of mass meetings, which unlike those exhibited by the Young Irelanders whom followed O'Connell were much more peaceful. This then is another example of continuity in the methods and aims of the Irish Nationalists. A group which showed more change than the Land League were the Fenians, the Fenians were a secret organisation. Although they can be seen to differ from the Land Leaugue and O'Connell in their methods, they did hold a similar approach to that of the Young Irelanders, they also held similar aims in that they too wanted to achieve a Republic of Ireland. ...read more.

Parnell did however form the Kilmainham Treaty with Gladstone, this treaty saw both the British government and Parnell make an effort to co-operate, it is possibly because of Parnell's use of constitutional methods that helped persuade the government to make an effort and listen. This was significant in Irish Nationalism as for the first time they were working together, they were taking each side into account. This then shows that whilst the changed methods of the Fenians helped gain the attention of the government, it was in fact the continuity displayed by Parnell to use constitutional methods that had the greatest effect in gaining their aims. To conclude, it is clear from looking at the various groups and leaders that Irish Nationalism did certainly change some of its aims and methods through the period 1848 to 1890. There are however also examples of continuity shown throughout this period in both the aims and methods used. Whilst there are certain groups such as the Fenians who used less constitutional methods and more aggressive militant methods; there are still those that show continuity such as Parnell who was much more constitutional like O'Connell. ?? ?? ?? ?? ...read more.