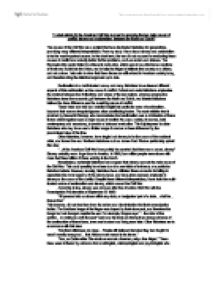 To what extent did the American Civil War succeed in removing the two main causes of conflict: slavery and sectionalism, between the North and South?

To what extent did the American Civil War succeed in removing the two main causes of conflict: slavery and sectionalism, between the North and South? The causes of the Civil War are a subject that have fascinated historians for generations, provoking many different interpretations. From my study I have found slavery and sectionalism to be the most important causes. In the short term, the war did not succeed in eradicating these causes of conflict and actually incited further problems, such as racism and violence. The Reconstruction period failed to achieve its main aims, which were to re-unite the two sections of North and South into the Union, and to help the Negro to infiltrate that country as a citizen, and not a slave. I also aim to show that these forces are still evident in American society today, and therefore bring the historical argument up to date. Sectionalism is a multi-faceted cause, and many historians have stressed different aspects of this sectionalism as the cause of conflict. Cultural and social historians emphasise the contrast between the civilisations and values of the two regions, whereas progressive historians stress the economic gulf between the North and South, and Marxist historians believe the class difference was the overriding cause of conflict. These views are valid as a detailed insight into particular areas of sectionalism, however their narrow viewpoint ignores other contributing factors. ...read more.

Whites disallowed blacks the right to better their position through education. Post war public education was only provisioned for whites, as they believed that the education of blacks was "a waste of effort, or even dangerous" (Degler). All over the South in 1865-7 any white person who attempted to instruct Negroes was subject to attacks and violence. Therefore the blacks were further denied rights, much the same as they were under slavery. Under the driving will of the Radical Republicans, the fourteenth and fifteenth Amendment of 1866 and 1869 were adopted to the Constitution. These allowed the blacks to be full citizens, and equal in rights and voting privileges with white men. This threat of possible black power to white supremacy caused an upsurge of hatred towards the blacks, and an outbreak of violence and intimidation at the ballot box. Groups such as the Ku Klux Klan, Knights of White Camelia, The White Brotherhood and The Pale Faces began to emerge. Their aim is shown in the official charge to the new recruits of the Ku Klux Klan in 1867: "Our main and fundamental objective is the maintenance of the supremacy of the white race in this Republic." Therefore we can see that the emancipation of the slaves actually provoked worse reaction towards the Negroes, and made their life one filled with terror, which it had net been to the same extent before. ...read more.

This can be viewed in a positive manner however, in that we are given deep insight into one type of historical viewpoint, a view that many post-war Southerners would have held, one that evidently still exists today. This idea of Southern nationalism was deeply rooted in their fear of losing their traditions and therefore the status quo of the section. It was an unwillingness to change into a section like the North. They had their stereotypical views of the North, thus to change they felt they would incite "moral and Physical ruin." Therefore it can be seen that not only was slavery still apparent in America after the Civil War, but also the divisions between the sections still existed. Thus the reconstruction had failed in most of its aims, and the Civil War had not succeeded in removing its causes on conflict. Even in today's society, one hundred and fifty years later, the causes behind the war are still evident in America. We can see that when the causes relate to the opinion, habits and traditions of the people they are extremely difficult to remove, and the mid set is often passed down through generations. The range of sources that I have used have all been unanimous in one aspect: they all acknowledge that the Civil War has been and will continue to be one of the most influential events that America has ever experienced, and that it is difficult to assess whether the divisions underlying the war will ever be fully removed from American society. ...read more.