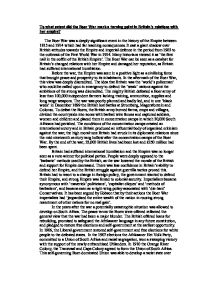 To what extent did the Boer War mark a turning point in Britain's relations with her empire?

To what extent did the Boer War mark a turning point in Britain's relations with her empire? The Boer War was a deeply significant event in the history of the Empire between 1815 and 1914 which had far reaching consequences. It cast a giant shadow over British attitudes towards the Empire and imperial defence in the period from 1902 to the outbreak of the First World War in 1914. Many historians viewed it as 'the first nail in the coffin of the British Empire'. The Boer War can be seen as a catalyst for Britain's changed relations with her Empire and damaged her reputation, as Britain had suffered international humiliation. Before the war, the Empire was seen in a positive light as a civilising force that brought peace and prosperity to its inhabitants. In the aftermath of the Boer War, this view was deeply discredited. The idea that Britain was the 'world's policeman' who could be called upon in emergency to defend the 'weak' nations against the ambitions of the strong was discredited. ...read more.

There was less confidence in Britain's ability to defend her Empire, and the British struggle against guerrilla tactics proved this. Britain had to resort to a change in foreign policy, the government wanted to defend their Empire, and strong Empire was linked to colonial security. Imperialism became synonymous with 'maverick' politicians', 'capitalist cliques' and 'methods of barbarism', and became seen as a right-wing policy associated with 'die-hard' Conservatives. It has been argued by Hobson that by their actions the Boer War imperialists had 'jeopardised the entire wealth of the nation in rousing strong resentment of other nations for no real gain'. In the years after the war a potentially catastrophic situation was allowed to develop on South Africa. The peace terms the Boers were offered reflected the general view that the war had been a major blunder. The British offered loans for rebuilding, promised to safeguard the Afrikaaner language in any future constitution, and pledged to restore free elections and self-government at the earliest opportunity. ...read more.

The Empire became more important for trade and investment than ever before. Between 1903 and 1914 British exports to the Empire increased by 31 per cent, British trade with Africa doubled, 42 per cent of all British overseas investment went to the Empire and there was cheap labour in the gold mines. The Boer War marks the dividing line between the passionate imperialism of the late-Victorian England and the loss of self-confidence in Britain about its future that has typified the twentieth century. This loss of confidence, though perhaps not completely warranted, was widely felt. After the Boer War the British never believed as strongly as they had before that it was the British Empire that the sun would never set on. There was a deeper sense of pessimism about the future of Britain and the strength of the Empire was questioned. The Boer War permeated the British view of its long-term relations with the people of its Empire. The war marked a turning point for Britain, and triggered the decline of British Empire. The Empire was no longer seen in a positive light and Britain had little or no control over South Africa and the white settler colonies. ...read more.