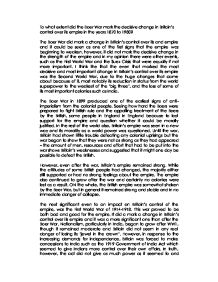 To what extent did the Boer War mark the decisive change in Britain's control over its empire in the years 1870 to 1980?

To what extent did the Boer War mark the decisive change in Britain's control over its empire in the years 1870 to 1980? The Boer War did mark a change in Britain's control over its and empire and it could be seen as one of the first signs that the empire was beginning to weaken. however, it did not mark the decisive change in the strength of the empire and in my opinion there were other events, such as the First World War and the Suez Crisis that were equally if not more important. I think the that the even that marked the most decisive and most important change in Britain's control over its empire was the Second World War, due to the huge changes that came about because of it, most notably its reduction in status from the world superpower to the weakest of the 'big three', and the loss of some of its most important colonies such as India. The Boer War in 1899 produced one of the earliest signs of anti-imperialism from the colonial people. ...read more.

However, in response to the increasing demands for independence, Britain was forced to make concessions to India such as the 1919 Government of India Act which seemed to give Indians more control over their own affairs. In truth, however, the act did not give as much power as it seemed to and Britain generally remained firmly in control of India. 1918 was not the first time Indian nationalism was present however as it had been around since 1909, before WW1. India began to lose value for Britain after the war, particularly as a market for cotton and also as a result of the tariffs India introduced on British goods from 1919. India's value to Britain continued to decline and from 1934 onwards, Britain was faced with the prospect of paying for the Indian army, which had been one of India's greatest assets to Britain. However, WW1, while important, was still not the decisive factor in Britain's loss of control over the empire. No colonies were lost as a result and Britain even gained territory in the form of mandates from the broken up German and Ottoman Empires. ...read more.

Yet, WW2 did not mean the total loss of Britain's empire. It still retained many of its colonies particularly those in Africa, where they followed a policy of 'new Imperialism' rather than decolonisation. However African nationalists were soon influenced by those in India eventually were also granted independence, as they too began to lose value and become costly to maintain. The final event to mark a change in Britain's imperial strength was the Suez Crisis of 1956. The crisis affected relations with the Middle East and lost Britain control of the Suez Canal, previously its most important trade route. However much of Britain's empire was already in decline by this point and while the Suez Crisis highlighted the extent of Britain's loss of control and showed the world, most particularly those African nationalists still fighting for independence, it was not the most important event to cause a change in Britain's imperial power. Overall, WW2 marked the decisive change in Britain's control of its empire as it was at this time that Britain lost its most important colony of India and found its status in the world to weaken dramatically. ...read more.