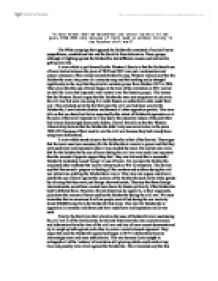 To what extent did the Bolsheviks use terror tacticts in the years 1918-1921 only because of their need to achieve victory in the Russian civil war?

To what extent did the Bolsheviks use terror tacticts in the years 1918-1921 only because of their need to achieve victory in the Russian civil war?? The White campaign that opposed the Bolsheviks consisted of mainly Tsarist sympathisers, constitutionalists and the Socialist Revolutionaries. These groups, although all fighting against the Bolsheviks, had different reasons and motives for getting involved. A view which is put forward by the Western Liberals is that the Bolshevik use of terror tactics between the years of 1918 and 1921 was just a continuation and natural extension of the already created Bolshevik coup. Western Liberals say that the Bolsheviks came into power in a minority coup and that nothing really changed significantly in the way that they tried to maintain power from October 1917 to 1924. They claim that this use of terror began at the time of the revolution in 1917 carried on until the Lenin had imposed a total control over the Russian people. This means that the Western liberals argue that the Bolsheviks were not using terror to only win the civil war but were also using it to make Russia an authoritarian state under their rule. ...read more.

They also believed that a successful Bolshevik leadership would 'trump' all use of terror. For example the Bolsheviks employed other methods that lead to victory such as War Communism. The Soviets say that this served a purpose in feeding all the workers and soldiers during the civil war whilst also enabling the Bolsheviks to win it. This view also argues and tries to justify the use of terror against the enemies of the Bolsheviks such as the white guards by claiming that they were just foreign interventionists. They say that these foreign interventionists would have created more harm for Russia politically if the Bolsheviks hadn't defeated them. However, Soviets historians do appear to, in their arguments; play down the amount of terror used by the Bolsheviks during the civil war. We must remember that an enormous 9 million people were killed during the war and only about 500,000 being from the Bolshevik Red army. This ratio for Bolsheviks to opposition is immense and shows just how much terror and repression really was used. ...read more.

So these other revisionists would say that the terror was not a feature of the regime to start off with and that it almost started by accident. Alongside this argument of terror accidentally occurring the revisionists say that Bolsheviks did indeed increase their terror due to the amount of popular support for their regime being drained away during the years of 1917 and 1918. Finally, the Revisionists claim that the Bolsheviks made and an extremely fundamental transition in their tactics as they were no longer liberating but instead oppressing. So, going back to the question on whether the Bolsheviks used terror tactics only because of their need to win the civil war. This is extremely interesting as it seems that the three different views are completely different, but if you look at them closer it is possible to say that it what is needed to answer the question is a mixture of all three. However the Revisionist argument does seem to be the strongest, not only because it has had time to develop and reflect on more present data and information but because it creates a justified and evidential view on the whole use of repression by the Bolsheviks during the civil war. Tom Gunhouse ...read more.