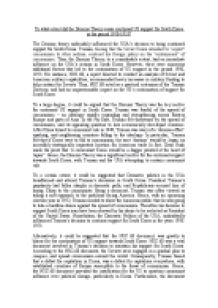 To what extent did the Domino Theory cause continued US support for South Korea in the period 1950-1953?

﻿To what extent did the Domino Theory cause continued US support for South Korea in the period 1950-1953? The Domino theory undeniably influenced the USA?s decision to bring continued support for South Korea. Truman, fearing that the Soviet Union intended to "export" communism to other nations, centered his foreign policy on the "containment" of communism. Thus, the Domino Theory, to a considerable extent, had an immediate influence on the USA?s actions in South Korea. However, there were numerous additional factors that led to the continuation of US support in the period 1950-1953. For instance, NCS 68, a report directed to conduct an analysis of Soviet and American military capabilities, recommended heavy increases in military funding to help contain the Soviets. Thus, NSC 68 acted as a practical extension of the Truman Doctrine, and had an unquestionable impact on the US?s continuation of support for South Korea. To a large degree, it could be argued that the Domino Theory was the key motive for continued US support in South Korea. ...read more.

Nonetheless, the Domestic Politics of the USA, undoubtedly influenced Truman?s decision to continue support for South Korea in the years 1950-1953. Alternatively, it could be suggested that the NSC 68 document, was greatly to blame for the continuation of US support towards South Korea. NSC 68 was a vital document involved in Truman?s decision to maintain his support for South Korea. According to the NSC-68 document, the Soviets were engaged in a gradual plan to conquer, and spread communism around the world. Consequently, Truman feared that a defeat for capitalism in Korea, was a defeat for capitalism everywhere, with established countries of Europe susceptible to the threat of communism. Hence, the NSC 68 document provided the justification for the US to question communist influence over political change, particularly in Korea. Furthermore, the document highlighted the fact that the Soviet Union was greatly out-spending the USA in terms of military expenditure. Thus the NSC 68 document was a considerable cause for the continuation of US support for South Korea. ...read more.

Thus, it was evident that if the US wanted to withdraw support for the South, they would have to end the war. This however proved a difficult task for Truman, and despite attempts, negotiations soon broke down. Therefore, it could be suggested that the Domino Theory?s significance was limited when reflecting on the precarious situation that the US were in. In conclusion, whilst the Domino Theory was undeniably a significant cause for the continuation of US support, there were other factors that were arguably of greater importance. The Domino Theory seemed to act as the catalyst for Truman?s actions in South Korea, however the impact of Domestic politics and increased pressure resulting from McCarthyism and The Red Scare, were perhaps more of a motive for Truman to further US support. Arguably, it was the weakness of the South Korean forces that prevented the US from withdrawing support, which furthermore strengthens the claim that the Domino Theory was not the key factor affecting the continuation of US support. Alex Skudder ...read more.