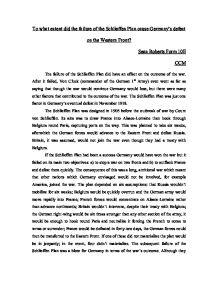 To what extent did the failure of the Schlieffen Plan cause Germany's defeat on the Western Front?

To what extent did the failure of the Schlieffen Plan cause Germany's defeat on the Western Front? Sean Roberts Form 10E CCM The failure of the Schlieffen Plan did have an effect on the outcome of the war. After it failed, Von Cluck (commander of the German 1st Army) even went as far as saying that though the war would continue Germany would lose, but there were many other factors that contributed to the outcome of the war. The Schlieffen Plan was just one factor in Germany's eventual defeat in November 1918. The Schlieffen Plan was designed in 1905 before the outbreak of war by Count von Schlieffen. Its aim was to draw France into Alsace-Lorraine then hook through Belgium round Paris, capturing ports on the way. This was planned to take six weeks, afterwhich the German forces would advance to the Eastern Front and defeat Russia. Britain, it was assumed, would not join the war even though they had a treaty with Belgium. If the Schlieffen Plan had been a success Germany would have won the war but it failed on its main two objectives: a) to stop a war on two fronts and b) to outflank France and defeat them quickly. The consequence of this was a long, attritional war which meant that other nations which Germany envisaged would not be involved, for example America, joined the war. The plan depended on six assumptions: that Russia wouldn't mobilize for six weeks; Belgium would be quickly overrun and the German army would move rapidly into France; French forces would concentrate on Alsace-Lorraine rather than ...read more.

Another area where the U-boat campaign failed and did more harm than good was in inducing pro-war feelings. This occurred when the Germans attempted to step-up the campaign and sunk American ships. The turning point for the anti-war American public was when the passenger ship the Lusitania was sunk, killing 128 Americans, just six days after the Gulflight, an oil tanker, was sunk. This led to a huge increase in pro-war feeling and was an important factor in America joining the war, albeit two years later. The Ludendorff Offensive was Germany's last throw of the dice. They were being starved at home, there was great anger at the Kaiser's government and morale was running low. The defeat of Russia in March 1918 allowed a million German soldiers to transfer to the Western Front. The Allies were now outnumbered but Germany had only six months before America joined the war. The German General Ludendorff decided on an all-out offensive using the storm troopers to move quickly, punch a hole in the Allied line and attempt to bring an end to the war. The appointment of General Foch as overall commander allowed the British and French to co-ordinate their armies and, with America, halt the German push. The German attack had failed due to two main flaws as well as good Allied defence. The storm troopers moved quickly and penetrated the lines but moved so fast they were sometimes left with little support and were vulnerable to counter-attack and artillery. ...read more.

The Germans were defeated. They had put everything into the Ludendorff Offensive and it had failed, as the Schlieffen Plan had failed. The Home Front was in a catastrophic situation and the morale was at a low. The German civilians had had enough of war. A mutiny of sailors and a take-over by the Socialists in October 1918 was the culmination of all of these factors. Kaiser Willhelm was forced to resign as thousands died from a flu epidemic that was spreading through Germany. The Socialists proclaimed Germany a republic and agreed to discuss peace with the Allies. It was impossible for them to fight on. There was widespread starvation. German industry had no fuels or chemicals and strikes and riots were spreading throughout the country. Germany had no remaining allies and was being driven back steadily through France and Belgium. There was no one reason why Germany were defeated in the First World War, there was just a web of causation for Germany's defeat. The evidence suggests that nothing is caused by a single event and the culmination of many events defeated Germany. Germany lost the war mainly though because they were not able to sustain their war effort. This was in contrast to the Allies; Britain had the empire to draw from and the introduction of America meant there were many more men available. Also the major German strategies; the Schlieffen Plan, the Ludendorff Offensives and U-boat campaign failed. The Schlieffen Plan was a significant factor in the outcome of the war. Its failure resulted in a long war of attrition. This was one of a series of setbacks that led to the defeat of Germany. ...read more.