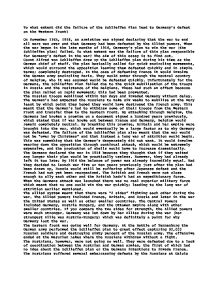 To what extent did the failure of the Schlieffen Plan lead to Germany's defeat on the Western Front?

To what extent did the failure of the Schlieffen Plan lead to Germany's defeat on the Western Front? On November 11th, 1918, an armistice was signed declaring that the war to end all wars was over and that Germany had been defeated by the Allied powers. When the war began in the late months of 1914, Germany's plan to win the war (the Schlieffen plan) failed. To what extent was the failure of this plan responsible for Germany's defeat in the war? The aim of this essay is to find out. Count Alfred von Schlieffen drew up the Schlieffen plan during his time as the German chief of staff. The plan basically called for quick encircling movements, which would surround the opposition leaving them defeated quickly and in simple terms; completely destroyed. In the case of defeating France it would involve the German army encircling Paris. They would enter through the neutral country of Belgium, who it was assumed would be defeated quickly. Unfortunately for the Germans, the Schlieffen Plan failed due to the quick mobilisation of the troops in Russia and the resistance of the Belgians. These had such an effect because the plan relied on rapid movement; this had been prevented. The Russian troops mobilised within ten days and invaded Germany without delay. ...read more.

By now the Austrians were effectively out of the war meaning that Germany was fighting alone. In Germany, there was a huge shortage of food due to the British naval blockade, which had prevented supplies reaching the German ports. An epidemic of illness hit a population which was already hugely weakened by the huge lack of food and killed large numbers of people. Strikes began inside Germany; these were incredibly difficult to control and fears arose that a revolution would occur, leading to more soldiers being pulled back from the two fronts to control it. Because of these terrible circumstances, the German people back at home began to lose support for the war and morale was low. Throughout the war, new technology began to develop. It was slowly at first but as the war continued, new methods of weaponry were created and were proved to be very effective. For example in August 1918, tanks meant that the allies were able to break through the German lines at Amiens. The four hundred tanks used were backed up by over eight hundred fighter planes; firing machine guns and dropping bombs. The new advances in technology meant that where as in previous wars the fighting had been purely attacking, methods of defence could be developed and lead to a different trend of fight style. ...read more.

The Allied advance continued throughout the Autumn pushing the Germans back through France. When the Allies were united they were very effective and managed a lot more in a few months than they had in the 3 years previously although this was obviously also down to German failure. In conclusion I would say that Germany's failure on the western front was mainly down to the failure of the Schlieffen plan for had the plan succeeded the war would not have become a war of attrition, it would have been over by 1915. However, German thinking was not as effective as previously thought as the offensive was not executed quickly enough and was bound to fail given the time it was in fact used. Had the plan been launched previously, Britain and her empire would not have been brought into the war and in direct combat with France Germany would have been victorious. However, even though the Schlieffen Plan had failed there was a point when it looked like Germany had won the war and had it not been for the dissolution of morale and the pace of the army they could have still succeeded. So although I would put the failure on the western front mainly down to the failure of the Schlieffen Plan I would say that it was not completely due to this and that there were other factors, even before the war had began, which led to German defeat. ...read more.