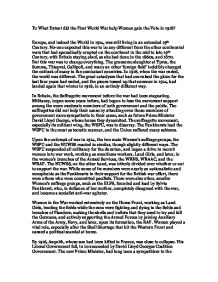 To What Extent did the First World War help Women gain the Vote in 1918?

To What Extent did the First World War help Women gain the Vote in 1918? Europe, and indeed the World in 1914, was still living in an extended 19th Century. No-one expected this war to be any different from the other continental wars that had sporadically erupted on the continent in the mid to late 19th Century, with Britain staying aloof, as she had done in the 1860s, and 1870. But this war was to change everything. The gruesome slaughter at Ypres, the Somme, Thiepval, Gallipoli, and many an other 'foreign field' indelibly changed the outlook of many in the combatant countries. In 1918, when the war ended, the world was different. The great cataclysm that had convulsed the globe for the last four years had ended, and the pieces tossed up that summer in 1914, had landed again that winter in 1918, in an entirely different way. ...read more.

The NUWSS, on the other hand, was bitterly divided over whether or not to support the war. While some of its members were nearly as nationalistic and xenophobic as the Pankhusrts in their support for the British war effort, there were others who were committed pacifists. There were also other, smaller Women's suffrage groups, such as the ELFS, founded and lead by Sylvia Pankhurst, who, in defiance of her mother, completely disagreed with the war, and became a socialist anti-war agitator. Women in the War worked extensively on the Home Front, working as Land Girls, tending the fields while the men were fighting and dying in the fields and trenches of Flanders; making the shells and bullets that they used to try and kill the Germans, and actively supporting the Armed Forces by joining Auxiliary Arms of the Army, Navy, and later, upon its formation, the RAF. ...read more.

The WSPU could be relied upon to resume their campaign of militancy after the war was over, and the Government did not relish the idea of having to take on the Suffragettes again. While it was entirely possible to continue to deny the women the vote and ride out the militant storm, it was not what the country needed after an expensive war. One must also remember that by this point, Britain, 'Mother of Democracy' was rather falling behind the rest of the democratic world when it came to the question of votes for women. Many countries, most notably the Dominions had already, or where in the process of, introducing women's suffrage, and how could Britain lag behind these upstart countries? The war, and the attendant upheaval also gave many prominent politicians such as Asquith the chance to climb down from a position that was now clearly untenable. The war thus provided a catalyst for the change that was already needed, and speeded the process considerably. ...read more.