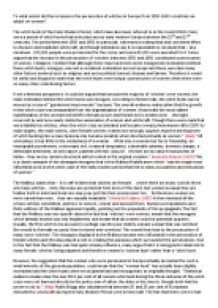 To what extent did the increase in the persecution of witches in Europe from 1550-1650 constitute an attack on women?

﻿To what extent did the increase in the persecution of witches in Europe from 1550-1650 constitute an attack on women? The witch hunts of the Early Modern Period, which have also been referred to as the Great Witch Craze, were a period of witch hunts that took place across early modern Europe between the 15th and 17th centuries. The period between 1550 and 1650 in particular, witnessed a widespread and concerted effort to discover and eradicate witchcraft, and though estimates vary it is reasonable to conclude that ? at a minimum - 100,000 people were prosecuted for the crime, and some 40,000 were executed for it. Some argue that the increase in the persecution of ?witches? between 1550 and 1650 constituted a persecution of women, I disagree. I believe that although there may have been some misogynistic motivations behind these witch hunts, misogyny was not a consistent motivation across Europe and there were also many other factors involved such as religious and socio-political turmoil, disease and famine. Therefore it would be unfair and illogical to state that the witch hunts were simply a persecution of women when there were so many other contributing factors. From a feminist perspective, it could be argued that because the majority of ?witches? were women, the main motivation behind the witch hunts was misogyny. According to Steven Katz, the witch hunts can be viewed as a case of ?genderised mass murder? because ?the overall evidence makes plain that the growth in the witch craze was inseparable from the stigmatisation of women. Historically the most salient manifestation of the unreserved belief in female power and female evil is evidenced in ?the tight, recurrent by and now nearly instinctive association of women and witchcraft. Though there were male that were labelled as witches, when the witch craze accelerated and became a mass phenomenon after 1500 its main targets, the main victims, were female witches. ...read more.

They were disturbers of social order; they were those who could not easily cooperate with others; they were aggressive. Witches, like male bullies, were not nice people. From this perspective, the pursuit of witches was no more a persecution of women than the prosecution of killers and mamers was a persecution of men. The parallel is not exact but it is not absurd. The prime interest of authorities at the time was the pursuit of witches. A witch to them was a person who had renounced Christian baptism, given his/her soul to the Devil, and was in conspiracy with other witches to overthrow social order. The purpose of a witch hunt was the prising out of dangerous persons who were enemies of God, the state and the people. The fact that these ideological enemies turned out to be 80 per cent female could have added fuel the misogyny of the age rather than been a direct consequence of it. Despite the long term stereotype, sixteenth century demonologists spent much time puzzling over why women were so much more wicked than men.? (Oldridge, 2002) It is arguable, however, that the example of women attacking each other is an indication of ?internalised misogyny? where women are sexist towards each other and project sexist stereotypes onto each other, but this is something that women still do to this day. Feminists have fought for equality for centuries, yet to this day they still attack each other. The internalised misogyny displayed in these witch trials is still present in the modern world; a comparable example is the ?slut shaming? that has become common behaviour amongst women in the western world. But, this still does not mean that the sole motivation behind the persecution of witches. The fact that women attacked each other may well be an indication of internalised misogyny but there is no evidence that these women were targeted BECAUSE they were women, just that females happened to be the main targets by both men and other women. ...read more.

In contrast, Steven Katz argues from a feminist perspective, but still explores the subject from all angles. He recognises that although the majority of ?witches? were women, these women accounted for a very small proportion of the European population and so it is arguable that the witch craze cannot truly be considered a misogynistic attack on women, because the pattern was not consistent enough across Europe. It is because of Katz?s ability to explore the arguments against his own point of view that I found his work so useful and an interesting contrast to the extreme feminist viewpoint of Barstow. However when arguing against the feminist interpretations I found ?witches and neighbours? by Robin Briggs particularly informative. Briggs argued that regional variations in the gender of prosecuted witches made it difficult to argue that the witch hunts were simply a misogynistic attack. He also notes the role that religious and political turmoil caused by the fall of the Holy Roman Empire and the Protestant reformation. His views were also supported by Thomas and Sibai. What I found most useful about Briggs? work was that while he did not support the feminist viewpoint, he didn?t discount it. He not only recognised that misogyny was a factor that contributed to the increase in witch persecutions, but also tried to explore other events which had taken place at the same time as these trials to understand what could have led to this period of mass murder and scapegoating. When viewing the increased persecutions from a religious stance, I found Hugh Trevor-Roper?s work quite interesting, in particular his arguments based around protestant and catholic conflict. He argued that Catholic states had executed their Protestant minorities, and vice versa. Although I found this argument quite interesting it is quite an old source and for this reason it has not received much support from the more modern historians that I have read. On a whole I did not find any one source more useful than the others, it was the combination of these sources which helped to draw out my argument and come to a logical and educated conclusion. ...read more.