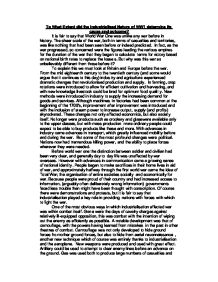 To What Extent did the Industrialised Nature of WW1 determine its cause and outcome?

To What Extent did the Industrialised Nature of WW1 determine its cause and outcome? It is fair to say that World War One was unlike any war before in history. The sheer scale of the war, both in terms of casualties and territories, was like nothing that had been seen before or indeed predicted. In fact, as the war progressed, so concerned were the figures leading the various empires for the duration of the war that they began to calculate terms for victory based on national birth rates to replace the losses. But why was this war so unbelievably different from those before it? To explain this we must look at Britain and Europe before the war. From the mid eighteenth century to the twentieth century (and some would argue that it continues to this day) industry and agriculture experienced dramatic changes that revolutionised production and supply. In farming, crop rotations were introduced to allow for efficient cultivation and harvesting, and with new knowledge livestock could be bred for optimum food quality. New methods were introduced in industry to supply the increasing demand for goods and services. ...read more.

Because people were proud of their country and had increased access to information, (arguably often deliberately wrong information) governments faced less trouble than might have been thought with conscription. Of course there were demonstrations and protests, but it is fair to say that industrialisation played a key role in providing nations with forces with which to fight the war. One of the most obvious ways in which industrialisation affected war was within combat itself. Gone were the days of cavalry charges against relatively ill-equipped opposition, this was combat with the intention of wiping out the enemy as efficiently as possible. A notable development was that of camouflage, with the powers having learned from mistakes in the past in other theatres of combat. Camouflage was not only developed to hide ground forces fro mother ground forces, but also to hide from aerial reconnaissance, another new technique which of course was entirely thanks to industrialisation and the aeroplane. New weapons were produced and used with great effect. Artillery could be used to attempt to clear enemy lines before an advance on the ground. ...read more.

Technological advances were extremely significant at sea, with the introduction of weapons such as the submarine, which was to become the centre of the conflict over unrestricted submarine warfare in 1917. The British Navy was instrumental in the war, cutting off Germany's Navy and naval supply routes, and gradually starving Germany. Arguably this was a major factor in the outcome of the war. Never before, or indeed since, have accepted military ideas been so dramatically rocked by conflict. New technology influenced everyone and everything in the war. Perhaps the end outcome of the war would have been the same if these advances had not taken place, but the course of the war was entirely dependent on them. The military world today uses so many of the lessons learned during World War One. Using tanks together in massed attacks, for example, is a common tactic in armies all over the world today, and was learned from the third battle of Ypres, in late July 1917. Industrialisation not only had an effect on the First World War, but indeed the courses and outcomes of countless conflicts since, including the Second World War. ...read more.