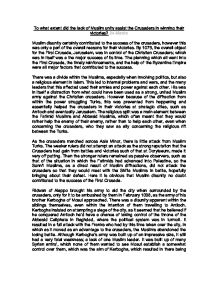 To what extent did the lack of Muslim unity assist the Crusaders in winning their victories?

To what extent did the lack of Muslim unity assist the Crusaders in winning their victories? 24 Marks Muslim disunity certainly contributed to the success of the crusaders, however this was only a part of the overall reasons for their victories. By 1079, the overall object for the First Crusade, Jerusalem, was in control of the Christian Crusaders; which was in itself was a the major success of its time. The planning which all went into the First Crusade, the timely reinforcements, and the help of the Byzantine Empire were all major factors that contributed to the success. There was a divide within the Muslims, especially when involving politics, but also a religious element in Islam. This led to internal problems and wars, and the many leaders that this affected used their armies and power against each other. His was in itself a distraction from what could have been used as a strong, united Muslim army against the Christian crusaders. However because of the diffraction from within the power struggling Turks, this was prevented from happening and essentially helped the crusaders in their victories at strategic cities, such as Antioch and eventually Jerusalem. ...read more.

Ridwan of Aleppo brought his army to aid the city when surrounded by the crusaders, only for it to be ambushed by them in February 1098, as the army of his brother Kerbogha of Mosul approached. There was a disunity apparent within the siblings themselves, even within the intention of them travelling to Antioch. Kerbogha insisted on attempting a siege of the city, as it seemed that he believed if he conquered Antioch he'd have a chance of taking control of the throne of the Abbasid Caliphate in Baghdad, where the political system was in turmoil. It resulted in a full attack with the Franks who had by this time taken over the city, in which as it moved as an advantage to the crusaders, the Muslims abandoned the losing battle. Although Kerbogha's army was built up of an impressive size, it still had a very fatal weakness; a lack of one Muslim leader. It was built up of many Syrian amirs', which none of them wanted to see Mosul establish a somewhat control over them, which was the aim of Kerbogha, which resulted in there being many conspiracies against his leadership. ...read more.

Extracting oaths from the principal figures that any conquests would be handed over to him, he provided supplies, additional troops and targets. There is also a great importance in the strength and power of the Crusaders aiding success. An example of this was at the Damascus, where it was in fact the skill and underestimation of the crusaders that won the battle. The experienced leadership of some of the crusaders, such as that of Bohemond and Raymond of Toulouse also had an important impact on determining a great success. A combination of their skill and knowledge, and ability to inspire their men proved successful in their intentions. It seems that Muslim disunity and later the lack of preparation of the Fatimids when they had to defend Jerusalem, certainly contributed to the success' of the Crusade and was perhaps the most significant factor. However it seems crusading historiography has tended to overlook the part played by the crusaders in their own victory. That victory was achieved by a combination of determination, religious conviction and leadership which was crucial in holding the army together alongside intelligent strategy and skill in fighting. ...read more.