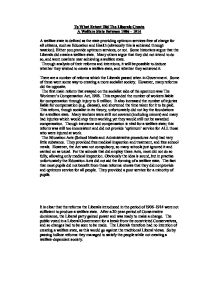 To What Extent Did The Liberals Create A Welfare State Between 1906 - 1914 A welfare state is defined as the state providing optimum services free of charge for all citizens, such as Education and Health (obviously this is achieved through taxation). Either you provide optimum services, or not. Some historians argue that the Liberals did create a welfare state. Many others argue that they did not intend to do so, and went nowhere near achieving a welfare state. Through analysis of their reforms and intentions, it will be possible to deduce whether they wished to create a welfare state, and whether they achieved it. ...read more.

It also increased the number of injuries liable for compensation (e.g. disease), and shortened the time taken for it to be paid. This reform, though socialist in its theory, unfortunately did not lay the foundations for a welfare state. Many workers were still not covered (including miners) and many had injuries which would stop them working yet they would still not be awarded compensation. Though insurance and compensation is vital for a welfare state; this reform was still too inconsistent and did not provide 'optimum' service for ALL those who were injured at work. ...read more.

They provided a poor service for a minority of pupils. It is clear that the reforms the Liberals introduced in the period of 1906-1914 were not sufficient to produce a welfare state. After a 20-year-period of Conservative dominance, the Liberal party gained power and was ready to make a change. The public voted in a Liberal Government for a break from the constricted Conservatives, and so changes had to be seen to be made. The Liberals therefore had no intention of creating a welfare state, as this would go against the traditional Liberal views. So by passing hollow reforms they managed to satisfy the people while not creating a welfare-dependant society. ...read more.