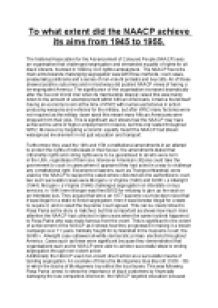 ﻿To what extent did the NAACP achieve its aims from 1945 to 1955. The National Association for the Advancement of Coloured People (NAACP) was an organisation that challenged segregation and demanded equality of rights for all black citizens, founded in 1909 by civil rights campaigners. The NAACP found its main aims towards challenging segregation was with three methods; court cases, pressurising politicians and a series of non-violent protests and boycotts. All of these showed positive outcomes and in most ways did pushed NAACP views of having a de-segregated America. The significance of the organisation increased dramatically after the Second World War when its membership sharply raised this was mainly down to the amount of unemployment within African Americans. America found itself having an economy boom at the time of WW2 with numerous factories in action producing weapons and vehicles for the military, but after WW2 many factories were not required as the military down sized this meant many African Americans were dropped from their jobs. ...read more.

and Smith v.s Allwright (1944). Morgan v.s Virginia (1946) challenged segregation on interstate on bus services, in 1944 Irene Morgan was fined $100 for refusing to give up her seat on an interstate bus. They argued that since an 1877 supreme court decision ruled that it was illegal for a state to forbid segregation, then it was likewise illegal for a state to require it, and in result the Supreme Court agreed. This can be clearly linked to Rosa Parks as the story is matched, but this is important as shows how much more attention the NAACP had collected in later years when the same incident happened to Rosa Parks who was made famous from the event. This is significant to the extent of achievement of the NAACP as it shows how they progressed in making it a known campaign over 11 years. Similarly fought for by Marshall in the Supreme Court, the Smith v. ...read more.

The Court found support for its decision in studies that indicated that minority students learn better in racially mixed classrooms. The next year, in Brown II, the Court announced a decision outlining its plan for implementing racial desegregation in the schools. The Court took a cautious approach, remanding the cases to district courts with orders to integrate the schools "with all deliberate speed?. In extent the NAACP achieved its aim to challenge the education board but also did not actually achieve any movement towards de-segregated schools until Little Rock High School. Once again this is significant as it shows how after time the NAACP actions become effective and gives the NAACP a sense of achievement but only in later years of legal battles between the Supreme Court. In conclusion the extent of achievement by the NAACP only began to have a successful bus boycott to end segregation in 1955. Up till then, the NAACP wasn't very successful in enfranchising blacks, or ending segregation. In many ways the NAACP use effective a strong legal case to fight on behalf of African Americas. ...read more.