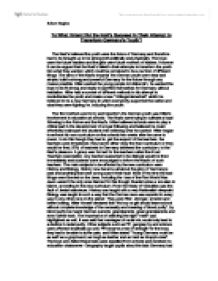 To What Extent Did the Nazis Succeed in Their Attempt to Transform Germanys Youth?

To What Extent Did the Nazi's Succeed in Their Attempt to Transform Germany's Youth? The Nazi's believed the youth were the future of Germany and therefore had to be brought up to be strong both politically and physically. The boys were the future leaders and the girls were future mothers of leaders. However it can be argued that the Nazi's failed in their attempts to transform the youth into what they wanted, which could be perceived to be a number of different things. The aims of the Nazi's towards the German youth were clear and simple, build a strong and powerful Germany for the future through any means possible. Hitler wanted the young people to idolise him, he wanted the boys to be fit strong and ready to sacrifice themselves for Germany without hesitation. Hitler had a number of different methods in his attempt to revolutionise the youth and create a new "Volksgemienschaft" which he believed to be a new Germany in which everybody supported the nation and what they were fighting for, including the youth. The first method used to try and transform the German youth was Hitler's involvement in education at schools. ...read more.

Other subjects such as PE, geography and science were affected drastically as well, PE became a test of strength for the boys, they had to be able to suffer pain, and Hitler stated "Young Germans must be as swift as a greyhound, as tough as leather and as hard as Krupp's steel". The boys who failed these tests were expelled from schools and received no education whatsoever. Geography taught pupils about the lads Germany had taken away from it after the First World War and the need for lebensraum, and science was taught with a military slant. Girls had a different curriculum however, they were taught about eugenics which meant selective breeding, they were taught how to be the best mother and housewife they could be. To some extent the change in education worked, all teachers supported this, however they didn't really have much choice. If a student was taught every subject in extreme nationalist ways they would grow up supporting Hitler and the Nazi's so in that respect the enforcement of a Nazi curriculum was a huge success, however girls were not happy about only being taught how to be good mothers, girls of 11 and 12 years old would not feel ready for family's so being taught it every day would simply be annoying to them. ...read more.

In my own opinion I believe the Nazi policies towards young people to be a complete failure. Even though during the time of the Nazi's there was little opposition, after the war and the Nazi's had gone there were very few young people who still believed in the Nazi policies, maybe because they realised the Nazi's weren't as strong as they made out or maybe because they never really supported them in the first place. However while the Nazi's were around they had to choice but to support them and agree with their policies, otherwise they would have been expelled from schools and receive no education. In my opinion the Nazi's were not trying to transform the youth, but to brainwash them into believing whatever the Hitler wanted them to believe. If their policies had been a success then the youth would have still believed in the Nazi's policies after the war and after the Nazi's had all gone. Some probably still did but there was very little. Others may argue that the Nazi's were successful in their attempt to transform the youth, however if they were successful I believe the youth would of carried on believing what they were taught by the Nazi's. Robert Hughes ...read more.