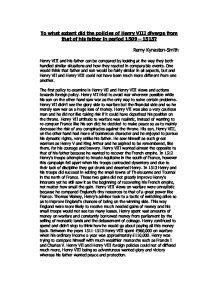 To what extent did the policies of Henry VIII diverge from that of his father in period 1509 - 1515?

To what extent did the policies of Henry VIII diverge from that of his father in period 1509 - 1515? Remy Kynaston-Smith Henry VIII and his father can be compared by looking at the way they both handled similar situations and how they reacted in comparable events. One would think that father and son would be fairly similar in all aspects, but and Henry VII and Henry VIII could not have been much more different from one another. The first policy to examine is Henry VII and Henry VIII views and actions towards foreign policy. Henry VII tried to avoid war wherever possible while his son on the other hand saw war as the only way to solve certain problems. Henry VII didn't see the glory side to warfare but the financial side and so he merely saw war as a huge loss of money. Henry VII was also a very cautious man and he did not like taking risk if it could have deputised his position on the throne. Henry VII attitude to warfare was realistic, instead of wanting to re-conquer France like his son did; he decided to make peace so as to mainly decrease the risk of any conspiracies against the throne. ...read more.

England was small meaning so was its tax base and when taxes were increased, this triggered off revolts making Henry VIII quite unpopular. Henry worked for around a mere one hour everyday making him deeply dependent on his ministers. This system worked well for Henry because if any policies proved to be unpopular, he could then blame his minister even when he might have agreed. On some occasions Henry had ministers executed so as to add to the appearance of his ministers being guilty of passing the policy and not himself. Henry VIII led a very disorganised and unreliable domestic policy when his father had previously worked so hard to bring order to the country. Henry VII was a Roman Catholic and had no major feelings of attitudes towards the Church. Conversely his son was the reason for the Protestant reformation in England even though he was a Roman Catholic. Henry was religious and for example when he married his brother's widow he was worried that they would be cursed with no male heir. Henry VIII wanted to put a stop to the growing power of the Church by passing certain laws, one of which meant priests could now only be associated with one church. ...read more.

However if a noble was to raise an opinion that perhaps Henry did not agree to or they disobeyed him then he would usually have them executed. Yet on the other hand Henry relied on the nobility because they made up a vast majority of his army, so it was the nobility that allowed him to pursue his claim to the French throne. Henry VIII policies diverged from that of his father's quite considerably. Henry VII was an organised and cautious king, who carefully thought out plans before carrying them out. Henry VII put the people of England and his son's future first before his own. He chose to focus on financially stabilising the country instead of gallivanting across Europe. Henry VIII however, was a young and immature king during 1509-1515 and wanted to be known as a great warrior just like Henry V or King Arthur. Henry VIII hastily spent his father's money on aimless wars and inconsiderately ran up huge debts which his children would need to sort out. Henry remained to be boisterous throughout his reign in England. Henry VIII and his father could not have been more different to one another; it was mainly due to their opposite personalities which made their policies differ so greatly. While Henry VII was king, he barely saw his son and so it was probably due to this separation that father and son turned out to be such different people. ...read more.