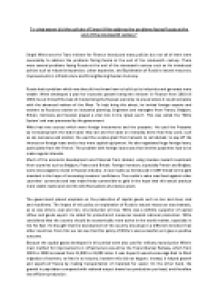 To what extent did the policies of Sergei Witte address the problems facing Russia at the end of the nineteenth century?

He called for protectionist measures towards national production. Witte considered that the country should be economically more active in the world market, especially in the Far East. He thought that the development of the country should go in a different direction than other countries. From this we can see that this policy of Witte?s was successful as it gave a positive outcome. Because the capital goods developed in this period were also used for military reproduction Witte's main method for improvements in infrastructure would be the Trans-Siberian Railway, which from 1881 to 1900 increased from 13,000 to 33,000 miles. It was hoped it would encourage East to West migration of workers, to feed in to industry, however this did not happen. Instead, it helped growth and exports of Russia by making transportation of materials far easier. On the other hand, the growth in population compared with national output shows less production per head, and therefore less efficient production. ...read more.

It is thought he focused too much on heavy industry, neglecting others Ike light engineering. Finally, Russia became overly dependant on foreign loans (never good if a financial crisis was to occur and foreign loans have to be repaid). Tariffs making goods scarce, heavy taxation meant prices for Russian consumers increased, whilst their wages stayed low. Workers had poor living and working conditions, and their discontent was severely repressed. Peasants' outdated farming methods led to less food for all. The increasing population gave peasants less and less land, and worsened food shortages. In conclusion after taking into consideration of all if the polices in which Witte introduced I have come to a decision where I believe that to some extent did the policies of Sergei Witte address the problems facing Russia at the end of the nineteenth century. Not all of the polices were addressed by the nineteenth century they actually created quite a few problems such as poverty because of raised taxes and bad living conditions for workers during the industrialization. By Kate Brook ...read more.