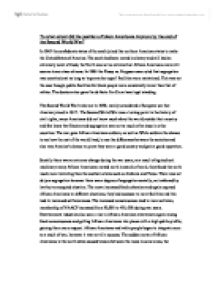 To what extent did the position of black Americans improve by the end of the Second World War?

To what extent did the position of black Americans improve by the end of the Second World War? In 1865 the confederate states of the south joined the northern American states to make the United States of America. The south had been rooted in slavery and still had an extremely racist attitude, the North was not as extreme but African Americans were still seen as lower class citizens. In 1896 the Plessy vs. Ferguson case ruled that segregation was constitutional as long as 'separate but equal' facilities were maintained. This was not the case though; public facilities for black people were consistently lower than that of whites. The decision also gave the de facto Jim Crow laws legal standing. The Second World War broke out in 1939, mainly considered a European war but America joined in 194? . The Second World War was a turning point in the history of civil rights, many Americans did not know much about the world outside their country and few knew that Racism and segregation was not as much of an issue in other countries. ...read more.

Again there was jealousy from white people as they thought African Americans were stealing their jobs. This led to violence from white workers such as at the Alabama Dry Dock Company, where African American workers were attacked over blacks and whites working in such close proximity. However moving to the cities meant there was greater economic gain and African Americans had access to better education, breaking the vicious circle of no education leading to menial jobs. Although for many this was short-lived as when White soldiers returned back from the war African American workers were thrown out of their jobs In the second world war African Americans were called up to fight for their country, many travelled aboard to places like England and France, there they saw that those countries were not segregated, that they were not deemed lower class citizens, this exposed the hypocrisy of their own country, many African American woman served as nurses, going against the social norm, although some found the idea of white soldiers being treared by black women appalling. Being treated with respect and equality abroad made African Americans more aware of how differently they were treated at home. ...read more.

More groups were set up such as CORE- the congress of racial equality which campaigned to challenge segregation. The NACCP raised activism and had successes in the Smith v. Allwright case which made white primary illegal. African Americans were also inspired by the work of Gandhi in India, fighting for Indian independence and Asian equality; this motivated many to fight for change. The Second World War was a catalyst for change in America, good and bad. It could be said that practically not much was achieved, African Americans had seen brief successes economically in finding more jobs however this was short lived when soldiers returned home, politically over the 5 years not much was achieved either. Socially however African Americans felt more pride in themselves, the move northwards and experiences of other countries inspired African Americans to do something about their situation. Although there were no big changes to American laws and attitudes leading up to 1945, the effort of black people, and white people who fought for civil rights, laid the foundations for the civil rights movements of the 50s and 60s. The situation of African Americans may have not improved immediately but the actions and awareness raised during world war two led the way for even more change. ...read more.