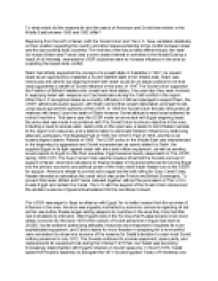 To what extent did the reasons for and the nature of American and Soviet intervention in the Middle East between 1956 and 1982 differ?

﻿To what extent did the reasons for and the nature of American and Soviet intervention in the Middle East between 1956 and 1982 differ? Beginning from the birth of Israel, both the Soviet Union and The U.S. have vacillated drastically on their position regarding the country and other issues pertaining to the conflict between Israel and the surrounding Arab countries. The motives of the two powers differed thusly, the west (to include Britain and France) had a more vested interest in activities in the Middle-East as a result of oil interests, whereas the USSR objectives were to increase influence in the area by exploiting the Israeli-Arab conflict. Stalin had initially supported the concept of a Jewish state in Palestine in 1947, he viewed Israel as an opportunity to establish a Soviet Satellite state in the Middle-east. Stalin was notoriously anti-semitic but aligning himself with Israel would be an astute political move that would guarantee a wealth of Soviet influence in the area. ...read more.

America?s refusal to provide aid to egypt set the ball rolling for Suez Canal Crisis, Nasser intended to nationalize the canal which was under French and British Sovereignty. To prevent this Israel, Britain and France colluded together without the permission of The U.S to invade Egypt and reclaim the Canal. The U.S with the support of the Soviet Union denounced the decision a source of great embarrassment for the countries involved. The USSR was eager to forge an alliance with Egypt, for no better reason then the promise of influence in the area. America was arguably motivated by economic concerns regarding oil but as this was before Russia began selling weapons to countries in the area they truly had little real motivations to intervene. After Egypt?s loss in the Six Day War Russia became even more deeply involved. By the early 1970?s the number of Soviet personnel in Egypt had risen to 20,000. Soviet advisers' patronizing attitudes, Moscow's slow response to requests for more sophisticated equipment, and Cairo's desire for more freedom in preparing for a new conflict were considered by observers as some of the reasons for Sadat's decision to expel most Soviet military personnel in July 1972. ...read more.

In 1948 this was a dangerous move that would alienate U.S oil interests, however the U.S still recognized the country. France remained the primary provider of weaponry for Israel during this period. The U.S wanted to remain neutral during the Suez Crisis so as not to alienate Nasser. At this point the only aid provided to Israel was food rations. The turn in policy came in 1967 during Lyndon B. Johnson's presidency, America went from remaining neutral to firmly picking a side. This created a great amount of distrust toward America from the Arab community. In 1973 America replaced France as the main provider of weaponry to Israel. This change to a more military approach toward the conflict was a result of the infamous Henry Kissinger, the once prominent diplomacy the U.S had shown was revised completely. The Camp David accord brokered By President Carter was in a sense the resolution of the Middle-East conflict between Israel and Egypt. It was in the vested interests for both Israel and Egypt to have close ties with America thereby creating stability in the region. ...read more.