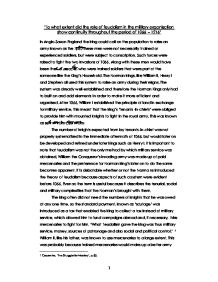 To what extent did the role of feudalism in the military organisation show continuity throughout the period of 1066?

In Anglo-Saxon England the king could call on the population to raise an army known as the fyrd. These men were not necessarily trained or experienced soldiers, but were subject to conscription. Such forces were raised to fight the two invasions of 1066. Along with these men would have been the Housecarls, who were trained soldiers that were part of the someone like the King’s Household. The Norman kings, like William II, Henry I and Stephen all used this system to raise an army during their reigns. The system was already well-established and therefore the Norman Kings only had to built on and add elements in order to make it more efficient and organised. After 1066, William I established the principle of land in exchange for military service, this meant that the king’s ‘tenants-in-chiefs’ were obliged to provide him with mounted knights to fight in the royal army. This was known as servitium debitum.

The number of knights expected from lay tenants-in-chief was not properly systematized in the immediate aftermath of 1066, but would later on be developed and refined under later kings such as Henry I. It is important to note that feudalism was not the only method by which military service was obtained, William the Conqueror’s invading army was made up of paid mercenaries and the preference for Norman king’s later on to do the same becomes apparent. It is debatable whether or not the Normans introduced the theory of feudalism because aspects of such a system were evident before 1066. Even so the term is useful because it describes the tenurial, social and military complexities that the Norman’s brought with them.

The king often did not need the numbers of knights that he was owed at any one time, so the standard payment, known as ‘scutage’ was introduced as a tax that enabled the king to collect a tax instead of military service, which allowed him to fund campaigns abroad and, if necessary, hire mercenaries to fight for him. “What feudalism gave the king was thus military service, money, sources of patronage and also social and political control.”[1] William II, like his father, was known to use mercenaries to a large extent. This was probably because trained mercenaries would make up a better army than if the king was forced to rely on the tenants-in-chief to produce a lacklustre supply of soldiers. So far it has been established that aspects of feudalism were apparent before 1066 and the Normans developed the idea, not necessarily to raise an army from the laymen, but instead to establish a tax by which they would be able to hire a professional army to fight for them.

After the concept of scutage and servitium debitum had been established and used by both William I and William Rufus, it was then developed further by Henry I, who made the system more rigorous and efficient. However as time went on the concept of feudalism was used less and gave way to more standardised taxing. The continued centralisation and development of the law throughout Henry I and Henry II’s reigns saw the gradual decline in feudalism because the government was now more interested in raising taxes in order to fund campaigns abroad, instead of using sources such as the fyrd. The development of the law and legal system provided the government with a larger income and therefore the more efficient the system was, the more money there was to fund these campaigns and the need for a feudal type system, where land was paid with military service was no longer necessary. Of course there was always the option of raising an army by these means if the king wished. So even though throughout William I and William Rufus’s reign the idea of feudalism was still utilised, the realisation that the potential income for the government via taxes would be more efficient for raising and maintaining an army was established.

This decline in feudalism was also a result of the centralisation of government and the demise of the Baron’s power throughout the period of 1154-1189. The King’s Court, legal reforms and the rigorous tax collecting in this period rendered the concept of feudalism obsolete and therefore less important concerning military organisation. The breakdown of power in Stephen’s reign allowed the Barons to reinstate their power in their local areas, which inevitably led to the resurrection of feudal law. The king was in no position in this period to call on the English people (especially out of his area of control) to fight for him.

The period of the first Civil War shows that the feudal system was replaced by the more efficient system of tax collecting and legal reforms created by the Normans. In Richard I’s reign there was a continuity concerning the need for money to raise armies of mercenaries because he sold off land as well as collected taxes in order to fund his campaigns abroad. John also sold land for money, for different reasons, such as the need for allies in his increasingly unsettled kingdom. Overall in the period 1066-1216 the feudal system was initially used by William I and his son, William Rufus, but as time went on the feudal arrangement gave way to a more efficient and organised structure that allowed the kingdom to prosper even if there was an absentee kingship.