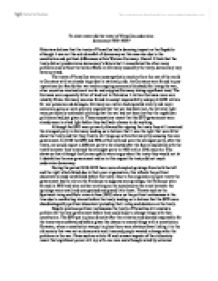 To what extent did the treaty of Versailles undermine democracy 1919-1923? Historians believe that the treaty of Versailles had a damning impact on the Republic although it was not the sole downfall of democracy as this was also due to the constitution and political differences within Weimar Germany. Overall I think that the treaty did not predetermine democracy's failure but it exacerbated the other many problems and without the harsh effects on Germany caused by the treaty, democracy may have survived. The treaty of Versailles was an unsympathetic reaction from the rest of the world to Germany with an already large dent in national pride. As Germany were forced to pay reparations (or face further war and an ongoing economic blockade) for losing the war, other countries involved went too far and crippled Germany taking significant land. The Germans were especially bitter of land lost to Poland as 1 million Germans were now ruled by Poles. Germany was also forced to accept responsibility and pay �1,000 million for war pensions and damages. ...read more.

show us the political restlessness at the time due to conflicting interest before the treaty leading us to believe that the SPD were disadvantaged by political discontent preluding their ruling and decision on the treaty. Despite previous political restlessness the treaty of Versailles still created a problem for the new government before they could hope to change things with their constitution. The SPD put in place directly after the armistice and deemed responsible for the treaty were unfavoured before given the chance to amend things with a constitution. However, when a constitution was put in place there were obvious flaws linking it to the old society that was not so democratic and it seemed people wanted a change after the problems in the war. Flaws such as article 48 and remnant aspects of the old society meant that significant power still lay with one man and although voted by universal suffrage he had the power to override the German people with article 48. The constitution did not gain them much support as the general consensus of historians today is that support would only be gained with a radical change and a revolution rather than a half hearted alteration. ...read more.

Evidence today suggests that the government may have favoured inflation as it generated foreign sympathy and they hoped it would lead to less of a debt to be owed. In fact the debt did not decrease as the treaty stated reparations must be paid in goods rather than money. I think that war expenditure and over the top reparations called upon Germany started the inflation but the French occupation of the Ruhr took it too far and in the end destroyed the German Mark. This leads me to believe that in the case of inflation, the treaty was to blame as it started the hyperinflation and as France were not happy they occupied the Ruhr leading to further economic difficulties. Overall I think I think that although the failure of democracy was due to both the treaty of Versailles and political indifferences before the treaty, we cannot be too damning of Weimar Germany's attempt at democracy. However, generally I think it is safe to say that political discontent and war/economic weariness set up the failure of democracy but the treaty of Versailles delivered the crucial and final blow. ...read more.