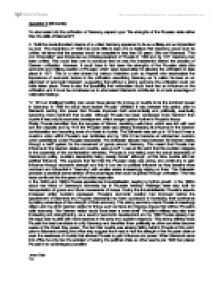 To what extent did the unification of Germany depend upon &quot;the strengths of the Prussian state rather than the skills of Bismarck&quot;?

Question 2 (50 marks) To what extent did the unification of Germany depend upon "the strengths of the Prussian state rather than the skills of Bismarck"? In 1849 the revolutionaries' dreams of a united Germany appeared to be as unlikely and as impractical as ever. The revolutions of 1848 had done little to lead one to believe that Germany would ever be unified, let alone that the process would be complete in less than 25 years. Otto von Bismarck, "The Iron Chancellor" was introduced as minister-president of Prussia in 1862 and by 1871 Germany had been unified. This could lead one to conclude that he was the mastermind behind the process of German unification. However, it could have in fact been the strengths of the Prussian state (the economic and military position of Prussia), which were responsible for allowing the unification to take place in 1871. This is a view shared by various historians such as Keynes who emphasises the importance of economic factors in the unification describing Germany as "a nation founded on an alignment of economic interests", suggesting that without a strong economy the unification could not have taken place. There is also the possibility that nationalism could have had an influence on the unification and it must be considered as to what extent Bismarck contributed to or took advantage of nationalist feelings. ...read more.

However, although Prussia had already advanced militarily (prior to Bismarck's appointment), Bismarck wanted to control when the war took place so Prussia would be further prepared, increasing the chances of victory. Bismarck used his diplomatic skills to delay the war and between 1864 and 1865 promoted an alliance with Austria to give Prussia more time to prepare for the likely conflict. In the Schleswig-Holstein crisis the two countries worked together to stop the annexation of the duchies. At the Gastein convention it was decided that Austria would get Holstein and Prussia would get Schleswig. In Bismarck's mind this was just a short-term solution and he described the solution as "papering over the cracks". Bismarck was always preparing for the conflict with Austria, which he believed, was drawing ever closer. Following the Schleswig-Holstein crisis Bismarck was able to wage war on Austria. He assured there would be no opposition from other great powers by making an alliance with Italy promising Venetia for help in the event of a war while, hinting to France that they would get some of the Rhineland if they stayed neutral in the case of an Austro-Prussian war. Britain were unlikely to get involved as they operated a policy of non- intervention and Austria had lost Russian support in the Crimean war saga. ...read more.

Undoubtedly, the unification does not have one single cause. The strength of the Prussian state was key in allowing the unification to take place as it put Prussia in a both dominant and powerful position. The economic development of Prussia began prior to Bismarck coming into power, which suggests he had little involvement in it although the period of growth did continue during Bismarck's period in office. There is no denying that Bismarck did take advantage of situations but it would be wrong to evoke that Bismarck was always in control and created the events which took place which is what he would lead one to believe through his memoirs. Bismarck clearly set out to simply expand Prussia rather than to unify Germany. The fact that he ended up unifying Germany would suggest he wasn't in control of events and the skills of Bismarck weren't the cause of the unification. If Bismarck had not been in office between 1861 and 1871 the unification still may have taken place because there was national feeling, Prussia was strong, Austria were weak and any leader is likely to have been able to stumble through the process of unification as Bismarck did. This suggests that the strength of the Prussian state played a more important role in the unification than did the skills of Bismarck. TOTAL WORD COUNT: 2995 Jason Daly 13J ...read more.