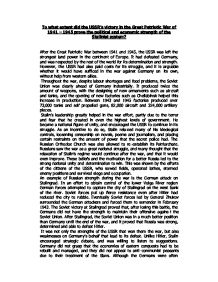 To what extent did the USSR's victory in the Great Patriotic War of 1941 - 1945 prove the political and economic strength of the Stalinist system?

To what extent did the USSR's victory in the Great Patriotic War of 1941 - 1945 prove the political and economic strength of the Stalinist system? After the Great Patriotic War between 1941 and 1945, the USSR was left the strongest land power in the continent of Europe. It had defeated Germany, and was respected by the rest of the world for its determination and strength. However, the USSR had also paid costs for its struggle, and it is arguable whether it would have sufficed in the war against Germany on its own, without help from western allies. Throughout the war, despite labour shortages and food problems, the Soviet Union was clearly ahead of Germany industrially. It produced twice the amount of weapons, with the designing of new armaments such as aircraft and tanks, and the opening of new factories such as Cheliabinsk helped this increase in production. Between 1943 and 1945 factories produced over 73,000 tanks and self propelled guns, 82,000 aircraft and 324,000 artillery pieces. ...read more.

It was not only the strengths of the USSR that won them the war, but also weaknesses on Germany's behalf that lead to its defeat. Unlike Hitler, Stalin encouraged strategic debate, and was willing to listen to suggestions. Germany did not grasp that the economies of eastern conquests had to be rebuilt and managed, and they did not appeal to anti-communist peasants due to their treatment of the Slavs. Although the Germans were often welcomed as liberators by villagers weary of Stalin's rule, this changed after the way Russian citizens were treated. The Germans looted the land, and after the harvest of 1942, the Germans only permitted peasants to keep enough grain for two quarters of a pound of bread a day, these rations depopulating the countryside. Sending Russians away to work also left labour shortages in areas of which Germany had control. The strength of the USSR was greatly helped by the contributions of western allies. The war would have gone on for much longer were it not for their help. ...read more.

Its forces occupied most of post-war Eastern Europe, and it also won island holdings from Japan and other concessions from Finland as well as territories the Soviet Union had gained as a consequence of the Nazi-Soviet Non-aggression Pact. Throughout the war Russia was able to produce more than double the amount of arms than Germany, and it was always ahead industrially. However it was not only strengths of the Stalinist system that allowed the Soviet Union to triumph. Without western help the war could not have been won as quickly as it was, and it proved that the USSR did still need support from the west. Whilst the Stalinist regime was effective in encouraging its citizens to fight in the struggle against Germany, and Stalin proved an effective leader, it was also the weaknesses of Germany that led to its defeat, for instance its inability to manage the economies of its eastern conquests. The Stalinist System proved that it was strong both politically and economically after winning the war, however this was not without the help of western allies or weaknesses that Germany suffered. ...read more.