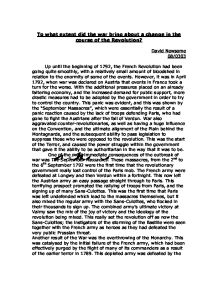 To what extent did the war bring about a change in the course of the French Revolution?

To what extent did the war bring about a change in the course of the Revolution? David Newsome 08/0303 Up until the beginning of 1792, the French Revolution had been going quite smoothly, with a relatively small amount of bloodshed in relation to the enormity of some of the events. However, it was in April 1792, when war was declared on Austria that events in France took a turn for the worse. With the additional pressures placed on an already faltering economy, and the increased demand for public support, more drastic measures had to be adopted by the government in order to try to control the country. This panic was evident, and this was shown by the "September Massacres", which were essentially the result of a panic reaction caused by the lack of troops defending Paris, who had gone to fight the Austrians after the fall of Verdun. War also aggravated counter-revolutionaries, as well as having a huge influence on the Convention, and the ultimate alignment of the Plain behind the Montagnards, and the subsequent ability to pass legislation to suppress those who were opposed to the revolution. This was the start of the Terror, and caused the power struggle within the government that gave it the ability to be authoritarian in the way that it was to be. ...read more.

It was partly because of this need for the support of the Sans-Culottes that the Montagnards pursued their desire for the execution of Louis so strongly. Even though every member in the convention agreed that Louis was guilty of crimes against the state, the assembly voted in favour of his execution by 387 votes to 334, a smaller majority than one may have expected. In executing Louis they lost a possible bargaining tool with foreign powers, but they also eliminated the possibility of Louis managing to escape abroad and return with an army to overthrow the revolution, and he almost did when fleeing to Varennes. A further problem for the Convention was the increasing numbers of riots and uprisings in provincial areas. These were going on for a long time before the outbreak of war, but were definitely affected and intensified by the war. The most famous of these uprisings was in the Vend�e. In this region the peasants had been growing increasingly discontented with the new governments, as they were paying more taxes than they had been under the Ancien R�gime, and as a result of this they disliked the new revolutionary government. This dislike turned to hatred when the Civil Constitution of the Clergy, which had been strongly resisted in the area as it was full of non-jurors, a resistance that was encouraged by the regions priests. ...read more.

This made his a dangerous figure, but he was one never to have great public support, preferring to live in comfort away from the public eye. In conclusion, the war has to be seen as the single most influential factor to this period of French history. Although many of the events that happened between 1792-3 were already in the pipeline well before the war broke out, it bought them more out into the open and also provoked them further. An example of this is the Terror in the Vend�e, where the issue of conscription only angered further a province much disillusioned with the revolution already. The war also bought about other events, such as the September Massacres - a total panic reaction to the lack of troops defending Paris after the initial failure of the war. On the other hand, there were some events that would have happened, regardless of the war. I think that Louis was always going to be executed, and that the Montagnards would have dominated the Convention whether there had been the war or not. Either way that you look at the events, most of them were not out rightly caused by the war, but most of them were definitely changed by it and it was the most important event of the revolution so far. War definitely changed the revolution, more for the worse than the better. ...read more.