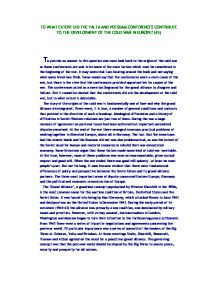 TO WHAT EXTENT DID THE YALTA AND POTSDAM CONFERENCES CONTRIBUTE TO THE DEVELOPMENT OF THE COLD WAR IN EUROPE?

TO WHAT EXTENT DID THE YALTA AND POTSDAM CONFERENCES CONTRIBUTE TO THE DEVELOPMENT OF THE COLD WAR IN EUROPE? (45) To provide an answer to this question one must look back to the origins of the cold war as these conferences are said to be some of the main factors which must be considered in the beginning of the war. It may seem that I am beating around the bush and not saying what some historians think. Some would say that the conferences were a main cause of the war, but there is the view that the conferences provided opportunities for causes of the war. The conferences acted as a mere battleground for the grand alliance to disagree and fall out. But it cannot be denied that the conferences did aid the development of the cold war, but to what extent is debatable. The story of the origins of the cold war is fundamentally one of how and why the grand alliance disintegrated. ...read more.

However, with victory assured, decision-makers in London, Washington and Moscow began to turn their attention to the forthcoming peace settlement. From 1943 there were a series of tripartite negotiations and agreements concerning the post-war world. Of particular importance was a series of summits of the leaders of the Big Three at Teheran, Yalta and Potsdam. At these meetings Stalin, Churchill, Roosevelt, Truman and Attlee agreed on the need for a peacetime grand alliance. The governing concept was that the post-war world should be shaped by the Big Three to assure peace, security and prosperity for all nations. Stalin, Roosevelt and Churchill, met for the first time at Teheran (present day Iran) at the end of 1843. They met again at Yalta in Crimea in February 1945. At Yalta they agreed to divide Germany into 4 occupation zones (USSR, USA, UK and France.) Also to punish the Nazis who had surrendered by punishing war criminals, to agree reparations for war damage, to destroy German military power and to hold a conference in San Francisco to set up a United Nations organisation. ...read more.

This was evidence of mistrust. In July 1945 the leaders of the Allies met at Potsdam in Berlin- Stalin, Truman and Atlee who were the leaders at this time confirmed much of what was agreed at Yalta. But as at the earlier meeting there were disagreements over the detail of what they had discussed. It must be taken into account that these meetings did not cause the cold war. They provided opportunities for the allies to disagree over how they wanted the post war world to be organised. It was these disagreements that contributed to the development of the cold war. But they also contributed to the growing hostility between the major powers. It is thought that the major powers were only united in their determination to defeat Germany. But there was already hostility between Stalin and the west before the conferences so it must be said that the conferences did contribute to the development of the cold war with providing opportunities and providing extra hostility to the allies. But not to a great extent as the conference wasn't one the direct causes of the war it was a corridor for the main causes to pass through. ...read more.