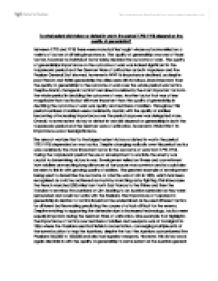 To what extent did victory or defeat in war in the period 1792-1918 depend on the quality of generalship?

This change led to definitive victories such as Spicheren in 1870 where despite the French having the technological advantage of the Chassepot, the superior organisation of the Prussian artillery led to victory. However, the importance of quality of generalship decreased in WW1 as is shown by the fact that the Allies were victorious despite possessing far less able generals than the Germans. This can be exemplified by the battle of the Somme in 1916, where Haig failed to realise that German trenches had not been destroyed by Allied bombardment and continued to send British infantry to advance en masse only to be confronted by German fire, leading to 60,000 casualties. This therefore shows that initially quality of generalship was important on the outcome of war, however this importance declined in WW1. Overall to a significant extent generalship did influence the outcome of wars in both Napoleonic warfare and the Wars of German Unification, however in WW1 it had less impact. The area of warfare that to the largest extent decided the outcome of wars from 1792 to 1914 was tactics, and this was consistently the case throughout the period despite changes in tactics, notably the key turning point being the introduction of trench warfare. Quality and numbers of soldiers were also consistently important in dictating the outcome of wars during this period, with the importance of quality increasing as more and more countries conscripted untrained soldiers. ...read more.