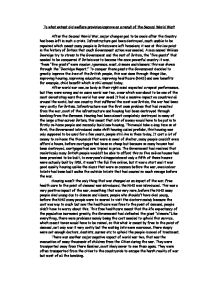 To what extent did welfare provision improve as a result of the Second World War?

To what extent did welfare provision improve as a result of the Second World War? After the Second World War, major changes gad to be made after the Country had been left in such a crisis. Infrastructure gad been destroyed, much unable to be repaired which meant many people in Britain were left homeless, it was at this low point in the history of Britain that much Government action was needed. A man named William Bevridge try to stress to the Government and the rest of Britain, the "five giants" that needed to be conquered if Britain was to become the once powerful country it was. These "five giants" were squalor, ignorance, want, disease and idleness; this was shown through the "Bevridge Report." To conquer these giants the Government decided to greatly improve the lives of the British people, this was done through things like, improving housing, improving education, improving healthcare (NHS) and new benefits for example, child benefit which is still around today. After world war one, no body in their right mind expected a repeat performance, but they were wrong and so came world war two, a war which was about to be one of the most devastating wars the world has ever seen! ...read more.

there people from the "cradle to the grave" It has to be said that if it weren't for the war these giants wouldn't seem so enormous and daunting, the war encouraged squalor with the slums used as housing caused by bombing, it encouraged want, people needed healthcare as disease would often spread quick due to the cramp housing and the bombing of housing, it encouraged disease as now more and more people were living in squalor, living all close together, it encouraged ignorance, more and more children would have to leave school earlier in order to help rebuild the Country, finally it encouraged idleness, businesses had been destroyed by the bombing and destruction and so led too major unemployment. On the other hand you could say that it was the war that encouraged the Government to try and defeat these giants and make Britain a better place, because the war had encouraged these giants, the Government then recognised them and decided to do something about it, by bringing in new reforms, making sure everyone got the right health care etc. After world war two the main improvement seemed to be the health service. ...read more.

The first one was a Grammar School, if you passed an 11+ test, you would be able to go to that school, and the test was often very hard, so really it was selective education, the top twenty per cent of the Country. The second school you could go to was a Secondary modern, if you failed the 11+ you would go to this school, it was more practical and less academic. The last school you could go to was a comprehensive; this was for all abilities, so it would be very mixed. Whereas before many children left school very early usually because they couldn't afford it, now children were leaving at a much later age. Now Britain had been made into a welfare state with the many universal benefits available, but these were still only free to the point of demand. It affected millions, practically everyone but in a good way. The Government had vowed to look after there people from the "cradle to the grave." It was the labour party who had introduced all of these benefits in 1945 and they were the ones that introduced the welfare state. Things had been much improved compared to life before the war, mainly through the many benefits introduced; you could even so as far to say that the war was a blessing in disguise! By Scott Simpson ...read more.