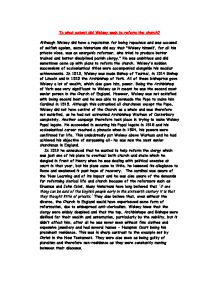 To what extent did Wolsey seek to reform the church? Although Wolsey did have a reputation for being rapacious and was accused of selfish egoism, some

To what extent did Wolsey seek to reform the church? Although Wolsey did have a reputation for being rapacious and was accused of selfish egoism, some historians did say that "Wolsey himself, for all his private vices, was an energetic reformer, who tried to produce better trained and better disciplined parish clergy." He was ambitious and did sometimes come up with plans to reform the church. Wolsey's sudden successions of ecclesiastical titles were accompanied alongside his secular achievements. In 1513, Wolsey was made Bishop of Tournai, in 1514 Bishop of Lincoln and in 1515 the Archbishop of York. All of these bishoprics gave Wolsey a lot of wealth, which also gave him, power. Being the Archbishop of York was very significant to Wolsey as it meant he was the second most senior person in the Church of England. However, Wolsey was not satisfied with being second best and he was able to persuade the Pope to make him Cardinal in 1515. Although this outranked all churchmen except the Pope, Wolsey did not have control of the Church as a whole and was therefore not satisfied, as he had not outranked Archbishop Warham of Canterbury completely. ...read more.

Wolsey was in control of the church by 1518 in England because of his power as a papal legate, which he had obtained from the pope that year and was conferred on him for life in 1524. He had the power to reform both the regular and the secular clergy, but he did little. He had plans to reform the lax discipline of the friars and the monks to reform the hierarchy of the church. The last plan would have meant the creation of 13 new bishoprics out of monastic foundations, then the English dioceses would have reflected the population distribution of Tudor England and not that of an earlier age. Wolsey also did not visit dioceses and his own observation for wealth allowed criticism and propaganda against the church. Wolsey also dissolved 30 religious houses and used the money raised to build colleges at Oxford and in his hometown of Ipswich, between 1524 and 1529. Christ's college still survives today. He had ambitious plans for his foundations and the advancements of learning, but their proposed endowments were still in his hands at his fall, and so were seized by the crown. ...read more.

Wolsey was corrupt and used his position to increase his personal wealth. One cannot though say that Wolsey did not have any good intentions in terms of his administration of the Church as he did have plans for its reform but they were never implemented due to various reasons including his lack of time to dedicate to them due to his pluralism. Some cynical critics of him though state that he only issued plans in order to make it seem as though he wanted to improve the efficiency of the Church but in fact had no intention to do this, there is no significant evidence that indicates this is correct. He kept bishoprics vacant and took the income from them and he also forced some clergyman to pay him a tribute including the Archbishop of Canterbury William Warham. In summary he did not run the Church in an efficient method but instead to increase his personal wealth and he blackened the image of what is supposed to be a divine institution. As well as being a corrupt administrator of the Church he did not implement many reforms he promised although he was in an excellent position to be able to implement them and his positive achievements are relatively minor. ...read more.