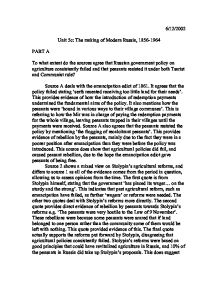 To what extent do the sources agree that Russian government policy on agriculture consistently failed and that peasants resisted it under both Tsarist and Communist rule?

6/12/2002 Unit 5c: The making of Modern Russia, 1856-1964 PART A To what extent do the sources agree that Russian government policy on agriculture consistently failed and that peasants resisted it under both Tsarist and Communist rule? Source A deals with the emancipation edict of 1861. It agrees that the policy failed stating 'serfs resented receiving too little land for their needs'. This provides evidence of how the introduction of redemption payments undermined the fundamental aims of the policy. It also mentions how the peasants were 'bound in various ways to their village communes'. This is referring to how the Mir was in charge of paying the redemption payments for the whole village, leaving peasants trapped in their villages until the payments were received. Source A also agrees that the peasants resisted the policy by mentioning 'the flogging of recalcitrant peasants'. This provides evidence of rebellion by the peasants, mainly due to the fact they were in a poorer position after emancipation than they were before the policy was introduced. This source does show that agricultural policies did fail, and caused peasant rebellion, due to the hope the emancipation edict gave peasants of being free. Source 2 shows a mixed view on Stolypin's agricultural reforms, and differs to source 1 as all of the evidence comes from the period in question, allowing us to assess opinions from the time. The first quote is from Stolypin himself, stating that the government 'has placed its wager... ...read more.

This was the case because peasants were forced to pay redemption payments to the Mir, a group who was in charge of paying the redemption payments for the whole village. This system meant that peasants could not leave their villages, and actually lost rights to the use of some land. Emancipation actually worsened the economic position of the peasant, mainly due to the fact the policy was aimed at preventing revolution, not increasing the economic status of the peasants. Although emancipation was a failure in terms of the economic success of the peasants, it did give the peasants hope that removing the tsarist regime could help increase their economic position. Stolypin tried to implement his land reforms after the 1905 revolution in order to try to save the tsarist regime. These plans involved allowing peasants to own their own land, removing the system in which peasants only farmed strips of land and allowing peasants to trade land freely. These proposals would have helped secure more economic certainty for the peasants, but the peasants failed to see this. The peasants enjoyed collective security at the time and seemed unwilling to take an extreme chance and try to set up a farm on their own. Because of this, Stolypin's reforms failed, although if given more time he may have been able to implement them successfully. The same problems created after emancipation were still present in 1914. Overall the two main agricultural policies implemented to try to improve the economic success of the peasants at the time were simply aimed at trying to keep the Tsarist regime in power, and this is why both the emancipation edict and Stolypin's reforms failed. ...read more.

The destruction of this class simply left collectivised farms to improve the peasants' economic position, which it was clear was not going to happen. The result of collectivisation was the total destruction of the economic freedoms the peasants had gained. They now had no land, no freedom to trade, and in many cases no even enough grain to feed themselves due to the badly run collectivised farms and the destruction of the kulak class. Overall, agriculture was completely neglected throughout the Tsarist and Communist regimes. Agricultural policies were simply used as to either keep the current government in power or to help achieve ideals the regime had e.g. industrialise Russia. In many ways, both regimes were the same, as they were both dictatorial and all policies passed on agriculture had other aims behind them. However, during the Tsarist regime, at least peasants had their own land that they could live on. During the communist regime, many peasants were forced into poverty by the policies of war communism and collectivisation. At the end of 1950 peasants did not have their own land, and were working for little reward, as the productivity was worse than in 1917. Therefore I believe that although the peasants economic stayed much on the same level as before emancipation, they received more benefits economically by the Tsarist regime than the Communist regime, simply because the Tsarist regime needed the peasants on their side to avoid revolution and remain in power. Collectivisation under the communist regime destroyed all economic gains the peasants had achieved before then in both regimes. ...read more.