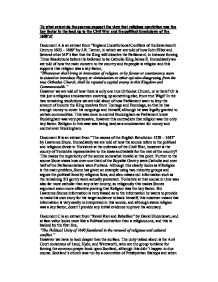 To what extent do the sources support the view that religious conviction was the key factor in the lead up to the Civil War and the political breakdown of the 1680's?

To what extent do the sources support the view that religious conviction was the key factor in the lead up to the Civil War and the political breakdown of the 1680's? Document A is an extract from "England Constitutional Conflicts of the Seventeenth Century 1603 - 1689" by J.R. Tanner, in which we are told of how John Elliot and Several other MP's fear that the King will dissolve the Parliament, in instance forcing Three Resolutions before the believed to be Catholic King James II. Immediately we are told of how the main concern to the country and its people is religion and this supports that religion was a key factor, "Whosoever shall bring in innovation of religion, or by favour or countenance seem to extend or introduce Popery or Arminianism or other opinion disagreeing from the true Orthodox Church, shall be reputed a capital enemy to this Kingdom and Commonwealth." However we are told of how there is only one true Orthodox Church, or is there? Or is this just a religious smokescreen covering up something else, from true Wigs? In the two remaining resolutions we are told about of how Parliament want to levy the amount of income the King receives from Tonnage and Poundage, so that he has enough money to cover his outgoings and himself, although he was legally granted to certain commodities. ...read more.

However we have to look deeper than the surface. The unity talked about is the Anti Court consensus of Laud, Hyde, and Wentworth, who are the group to blame for forcing the common prayer book upon Scotland, although this didn't happen in due course. Scotland's church was run by a committee of Presbyterian Bishops and when James was advised to force this Common Prayer Book upon Scotland, retaliation was sought after by the Scots who defeated every English advance and eventually Scotland defeated Wentworth's army at Durham where they then demanded to be paid for staying in Durham. This clearly proves that religion was a factor into starting a Civil War, and that People were now more worried from the Scottish Puritan threat, than the standing Catholic threat from James II who looked for Absolutism. Underdown similar to Stone has also picked on one identity of a religious group, of which being the Puritans, and he uses this to show that religion is the main cause of war, however the Consensus group were the ones who originally suggested forcing the common prayer book upon a country of whom didn't believe in the 'common' faith. ...read more.

This shows that the threat of Catholicism is high and that Britain want rid of this reinforcing the idea that religion is part of the cause for civil war. Gilbert goes on to talk about how there were many proceedings against bishops, "...that the proceedings against bishops..." These proceedings included the 17 Bishop Trials, where Bishops complained of how James had overthrown the Law of the Test Acts and allowed Catholics to become Officers in charge of a Protestant army, and placed Catholic officers even at sea. This shows the great resent for Catholicism and presents how James is trying to devastate the Anglican Faiths. Ironically James suddenly has a son appear form nowhere although he is very old and near the end of his reign and this further so proves that the Anglican faith is heading for the depths of Catholicism. This is an ideology that is very powerful and would have certainly aided towards the religious conviction of civil war. To reinforce this idea, Gilbert constructs his extract very carefully by linking the Catholicism and Slavery together. However Gilbert states how the whole nation is interested in politics to try and balance the argument out, but a majority of the nation didn't follow politics at all. ?? ?? ?? ?? ...read more.