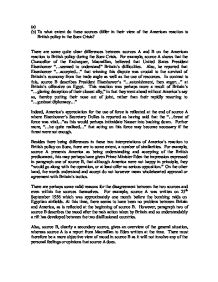 To what extent do these sources differ in their view of the American reaction to British policy in the Suez Crisis?

(a) (b) To what extent do these sources differ in their view of the American reaction to British policy in the Suez Crisis? There are some quite clear differences between sources A and B on the American reaction to British policy during the Suez Crisis. For example, source A shows that the Chancellor of the Exchequer, Macmillan, believed that United States President Eisenhower "...seemed to understand" Britain's difficulties. Also, he reported that Eisenhower "...accepted..." that winning this dispute was crucial to the survival of Britain's economy from the trade angle as well as the use of resources. In contrast to this, source B describes President Eisenhower's "...astonishment, then anger..." at Britain's offensive on Egypt. This reaction was perhaps more a result of Britain's "...glaring deception of their closest ally," in that they went ahead without America's say so, thereby putting their nose out of joint, rather than their rapidly resorting to "...gunboat diplomacy..." Indeed, America's appreciation for the use of force is reflected at the end of source A where Eisenhower's Secretary Dulles is reported as having said that the "...threat of force was vital..."as this would perhaps intimidate Nasser into backing down. ...read more.

This implies that Britain was such a great power that their threat of force would actually worry Nasser. At the time Britain was not as highly regarded in the world as they thought. Therefore, source A does show that Britain and perhaps America were under some illusions as to Britain's status in the world. From source B we can gather that America did not hold Britain in as high esteem as was believed. Indeed, their disbelief and then 'anger' at Britain's taking the initiative to act gives the impression that they wanted someone to cling to their coat tails and pat them on the back rather than an equal ally. President Eisenhower's explosive outburst on the telephone to Downing Street after the Israeli and British attacks on Egypt can certainly have left no doubt in Prime Minister Eden's mind as to America's opinion of his actions. The only explanation Eisenhower could imagine would cause Eden's "...glaring deception of their closest ally..." was "...that you have gone mad!" If Britain saw the reaction of the United States for what it was, then it would definitely have 'destroyed' their valued deceptive ideals of National unity and their pride in being shoulder to shoulder with one of the world's superpowers. ...read more.

For example, a Gallup poll in the winter of 1955 showed that 70% of those who voted were for Eden, but a few months later in the spring of 1956, this had dropped to 40%. This shows that the disillusionment was gradual and not immediate. This is backed up by the results of the by-elections during Eden's premiership, all but one showing a swing against the Conservative Party. Eden was expected to stand no nonsense from Nasser, who had been presented as a second Hitler. Perhaps his go down fighting stance was what brought the old unity and pride back from the war, at least in part. This is demonstrated in the opinion polls in which Eden received 48.5% of the popular vote on 30th October 1956, which rose to 60.5% on 21st November. In conclusion, there were cherished illusions destroyed by the Suez Crisis of 1956. The statement in question is therefore valid. However, it is reasonable to assume that not everyone had the proverbial wool pulled over their eyes and so the statement is not absolutely valid, but valid to a lesser extent. This disillusionment was seen as regrettable, but its possible that it helped prepare the British people for the decolonisation that inevitably happened during the 1960's. It was probably therefore the most positive product of the Suez Crisis. ...read more.