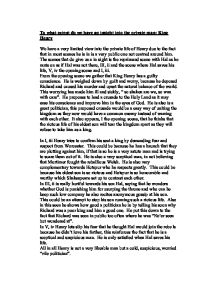 To what extent do we have an insight into the private man: King Henry

To what extent do we have an insight into the private man: King Henry We have a very limited view into the private life of Henry due to the fact that in most scenes he is in is a very public one not centred around him. The scenes that do give us a in sight is the reprimand scene with Hal as he rants on as if Hal was not there, III, ii and the scene where Hal saves his life, V, iv the opening scene and I, iii. From the opening scene we gather that King Henry has a guilty conscience. ...read more.

It also appears, I the opening scene, that he thinks that the riotous life of his eldest son will tear the kingdom apart as they will refuse to take him as a king. In I, iii Henry tries to confirm his seat a king by demanding fear and respect from Worcester. This could be because he has a haunch that they are plotting against him, if that is so he is a very astute man and is trying to scare them out of it. He is also a very sceptical man, in not believing that Mortimer fought the rebellious Welsh. ...read more.

This could be an attempt to stop his son running such a riotous life. Also in this seen he shows how good a politician he is by telling his soon why Richard was a poor king and him a good one. He put this down to the fact that Richard was seen in public too often where he was "Ne'er seen but wondered at". In V, iv Henry lets slip his fear that he thought Hal would join the rebels because he didn't love his farther, this reinforces the fact that he is a sceptical and suspicious man. He is only satisfied when Hal saves his life. All in all Henry is not a very likeable man but a cold, suspicious, worried "vile politician". ...read more.