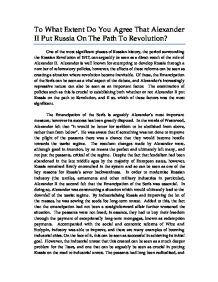 To What Extent Do You Agree That Alexander II Put Russia On The Path To Revolution? One of the most significant phases of Russian history, the period surrounding the Russian Revolution of 1917, can arguably be seen as a direct result of the rule of Alexander II. Alexander is well known for attempting to develop Russia through a number of reformatory policies, however, the effects of these reforms can be seen as creating a situation where revolution became inevitable. Of these, the Emancipation of the Serfs can be seen as a vital aspect of the debate, and Alexander's increasingly repressive nature can also be seen as an important factor. The examination of policies such as this is crucial to establishing both whether or not Alexander II put Russia on the path to Revolution, and if so, which of these factors was the most significant. The Emancipation of the Serfs is arguably Alexander's most important measure; however its success has been greatly disputed. In the words of Westwood, Alexander felt that "it would be better for serfdom to be abolished from above, rather than from below". He was aware that if something was not done to improve the plight of the peasants there was a chance that they would become hostile towards the tsarist regime. The resultant changes made by Alexander were, although good in intention, by no means the perfect and ultimately left many, and not just the peasants, critical of the regime. ...read more.

If the policy had been completely successful, the unrest that resulted could arguably have been avoided. As it is, the dissatisfaction that resulted from the policy's failure can ultimately be seen as firstly causing the October Revolution, and secondly the eventual Revolution which gripped Russia in 1917. Leroy-Beaulieu's assertion that "the emancipation was followed by numerous reforms, administrative, judicial, military, even financial; yet all these reforms, prepared by different commissions subject to rival or hostile influences, were undertaken in isolation, in an incomplete manner, without coherence and without a definite plan" is a particularly critical view of Alexander's efforts. On the other hand, Westwood offers a much complimentary view of Alexander's reign through his assertion that "with the possible exception of Khrushchev, no Russian ruler brought so much relief to so many of his people as did Alexander II, autocratic and conservative tough he was." On balance, although it would appear that Alexander's reforms were not as beneficial as they could have been due to the manner in which they were implemented, it is difficult to argue that they themselves were the major cause of the Russian Revolution. Alexander was simply trying to remove underlying problems that had haunted Russian society for generations. It is important to note however that by attempting and ultimately not succeeding to reform Russia to the desired extent showed the people the possibilities that were available to them. ...read more.

Through the implementation of his numerous reforms, Alexander was building a position from which the masses, guided by enterprising individuals like Lenin, would be able to overthrow the tsarist regime through a bloody regime. Through industrialisation, Alexander provided the conditions through which industrial unrest could be generated and exploited. In addition to this, the fact that Alexander's reforms were not entirely successful can be also be seen as an extremely important factor. The anger that resulted from these failures meant that people were extremely eager for change, and not just a change in Tsar. As Tsar's were not elected and were focused on regaining their own power, it was clear that many were operating in a way that was in no way in the interests of the people. The repressive measure which evolved, especially towards the end of his reign, can also be seen as an important aspect. This builds on other factors which resulted in the angering of the masses, and so the strong links between these factors can be seen as playing a key role throughout the debate. In conclusion, although each of factors played an important role in putting Russia on the path to revolution, it is arguable that the underlying theory that the masses were becoming increasingly angered by the policies implemented by Alexander can be seen as crucial to uncovering why the Russian Revolution of 1917 occurred. ?? ?? ?? ?? ...read more.