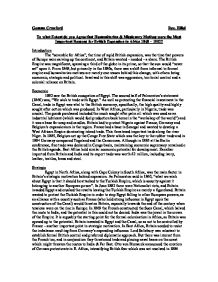 To what Extent do you Agree that Humanitarian &amp; Missionary Motives were the Most Important Reasons for British Expansion in Africa 1868 1902?

Gemma Crawford Rev. Hillel To what Extent do you Agree that Humanitarian & Missionary Motives were the Most Important Reasons for British Expansion in Africa 1868 - 1902? Introduction The "scramble for Africa", the time of rapid British expansion, was the time that powers of Europe were carving up the continent, and Britain wanted - needed - a share. The British Empire was magnificent, spanning a third of the globe in its prime, so that the sun would "never set" upon it. From 1868, but primarily in the 1880s, there was a shift from informal to formal empire and humanitarian motives are merely one reason behind this change, with others being economic, strategic and political. Involved in this shift was aggression, territorial control and a colonial reliance on Britain. Economic 1882 saw the British occupation of Egypt. The second half of Palmerston's statement (1860) was, "We wish to trade with Egypt." As well as protecting the financial investment in the Canal, trade in Egypt was vital to the British economy, specifically, the high quality and highly sought after cotton which was produced. ...read more.

India was the jewel in the crown of the Empire. It is arguably the starting point for the formal colonisation in Africa, as Britain was opened up to the potential. Britain invested in Egypt and the Canal, so as not to be controlled by France - another important point in strategic motivation. In East Africa, Britain needed to resist the imbalance resulting from Germany's expanding influence. Lord Salisbury was reluctant to establish formal British control and preferred diplomatic approach. But there was interest from the French too, and in conjunction they threatened trade and placing naval bases on the coast which might threaten the routes to India & Far East. Otto von Bismarck announced the creation of German protectorate in E. Africa, intensifying British fear which was not resolved in 1886 despite the "East Africa for Britain and Germany", which favoured German economic opportunities. Political From 1880 until the turn of the century, 90% of Africa was taken under European control. Britain had the largest share, 5 million square miles and they were followed by France (3.5 million square miles) with Germany, Italy, Belgium, Portugal and Spain portioning up the rest. ...read more.

This example taints the idea that missionary motives were the most important reason, whilst still acknowledging that they were fairly importance, as Livingstone's goal was to open up Africa through "Christianity, trade and civilization." Contemporary evidence reveals an emphasis on humanitarian motives. An example is Rudyard Kipling's poem, "The White Man's Burden" (1899), told of the moral obligation of the rich to help the poor. The poem also suggested that the black Africans were culturally and racially inferior to the white British whose moral duty or "burden" it was to instill Western culture and religion. This sense of European ascendancy, "cultural imperialism", proves philanthropic motives were a very important reason, but were they the most important? When men like the 1890 Prime Minister of Cape Colony, founder of South Rhodesia and overall ruthless imperialist Cecil Rhodes believed in "bringing the whole uncivilized world under British rule" (1876) it is easy to believe so. Conclusion Missionary motives were undeniably a key factor in British Expansion in Africa, but they were not the most important reason. In many cases, missionaries in Africa sought not only to Christianize natives, but to Europeanize them through dress and culture � a political statement of power ...read more.