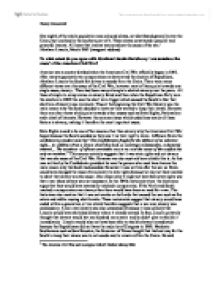 One eighth of the whole population was coloured slaves, not distributed generally over the Union, but localised in the southern part of it. These slaves constituted a peculiar and powerful interest. All knew that interest was somehow the cause of the war.' Abraham Lincoln, March 1865 (inaugural address) To what extent do you agree with Abraham Lincoln that slavery 'was somehow the cause' of the American Civil War? America was a country divided when the American Civil War officially begun in 1861. After many arguments over compromises on slavery and the election of Republican, Abraham Lincoln the South felt driven to secede from the Union. There were many different views ove rthe casue of the Civil War, however most of them point towards one single cause, slavery . There had been many attempts to abolish slavery over the years. All these attempts to compromise on slavery failed and then when the Republican Party won the election in 1860 this was the short term trigger which caused the South to fear that abolition of slavery was imminent. Thus at the beginning the Civil War Slavery was the main reason why the South decided to leave as they wanted to keep their slaves. However there are other views which point towards other causes such as State Rights, Nationalism and a clash of interests. However the common issue which underlines nearly all these factors is slavery, making it therefore the most important cause. State Rights is said to be one of the reasons other than slavery why the American Civil War began because the South seceded as they saw it as their right to leave. ...read more.

They believes that their agrarian way was superior to the North and The importance of slavery to the South made them determined to keep their slaves. Slavery was definitely the main difference between the North and South because they had a lot of other things in common. Furthermore, as the main difference between the North and the South was slavery and some people think that it was differences which caused the Civil War, this must mean that slavery was behind the cause of the Civil War. The Election of Lincol wa sone of the causes of the Civil War and and Lincoln wone because eof slavery . Slavery led to the rise of the Republicans as they were opposed to slavery. The Republican party pledged that they would end the expansion of slavery The Democrats became divided because of Slavery as they disagreed over the Lecompton Constitution. Stephen Douglas was the most popular of the Democrats however as he opposed the Lecompton constitution, which was by the pro slavery group this angered many of the Southern Democrats. This shows that slavery caused a divide within the Democrats and so it made them more unlikely to be able to defeat the Republicans .It was a Northern party which were defined by their views on slavery and the reason why the Northerners voted for them. The events of Bleeding Kansas between 1854-6 helped the Republican Party. Bleeding Kansas also worsened the issue as there was a pro- slavery posse which carried out the Lawrence raid and burned down buildings, however Northern journalists exaggerated the event greatly. ...read more.

Therefore, even though some would say that a war was unnecessary as a compromise could have been reached, this was unlikely as they needed to compromise on slavery which was a very difficult thing to do. Overall, even though more modern views such as those of the Progressionism and the Revisionists suggests that other factors were the cause of the Civil War apart from slavery, slavery is at the root of many other causes. The South were fighting for the right to have slaves and nationalism as they were fighting for self determination. There was the issue of a clash of interests between the Industrial North and the agrarian South, however it is not very likely that the South would simply leave because of tariffs. Slavery became a very divisive issue in the 1860 election. It was the reason behind the Democrats splitting and the reason why the Republican Party won. Many in the North wanted to vote for the Republicans because of their position on slavery which led to Lincoln winning the elections. However his win was also the short term reason for the South seceding from the Union which was worsened by the atmosphere of hysteria after Fort Sumter. The South deseparately wanted to keep their slaves and feared that once Lincoln was president he would abolish slavery. Even though their actions could have been seen as irrational at the time they wanted to fight for one thing and one thing only, the right to have slaves. 2699 Word 1 The American Civil War and its origins 1848-65 Hodder Murray 2006 2 The American Civil War and its origins 1848-65 Hodder Murray 2006 3 ibid 4 The American Civil War and its origins 1848-65 Hodder Murray 2006 History Coursework ...read more.