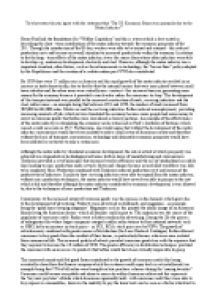 To what extent do you agree with the statement that The US Economic Boom was primarily due to the Motor Industry?

﻿To what extent do you agree with the statement that ?The US Economic Boom was primarily due to the Motor Industry?? Henry Ford laid the foundations for ?Welfare Capitalism? and this is a term which is best suited in describing the short - term contributions of the motor industry towards the economic prosperity of the 20?s. Through the introduction of the $5 day, workers were able to be trained and retained - this reduced production costs and became an overall stimulant to increased productivity within the economy. In relation to the the long - term effects of the motor industry, it was the source from where other industries were able to develop e.g. motorway development, electricity and steel. However, although the motor industry was a important stimulant, other factors, such as the advancements in technology, the ?laissez faire? policy adopted by the Republicans and the creation of a creditor nation post WWI also contributed. By 1929 there were 27 million cars in America and this rapid growth of the motor industry resulted in an increase in trade domestically, due to the fact that the internal barriers that were once placed between small town suburbia and the urban areas were virtually non - existent - this increased tourism, generating more money for the economy because it provided a much wider radius for consumers to shop. ...read more.

This optimism was the source of the popularity of consumer credit. Radios were a further medium for advertising. During the 20s the process of enlargement (by where larger companies merged smaller radio stations to form national networks such as NBC) led to an increase in stock prices - in 1921, RCAs stock price rose by 929%. The growth of advertisement, combined with greater means of distribution (the Sears Roebuck Catalogue) further allowed consumers to buy goods from the comfort of their homes, in particularly farmers who were once isolated from commercial life. The increased quality of adverts provided consumer goods/cars with the exposure that they required to become the 4.8 million of 1928. The greater efficiency in distribution techniques provided the consumer with easier access to products that before would have been virtually impossible to grasp. This increased morale and feel good factor contributed to the growth of consumer credit (this being essentially a loan from the finance company which the customer could repay back in set installments) an example being that 75% of all radios were brought on hire purchase schemes during the ?roaring twenties?. Consumer credit became acceptable and almost a necessity within American culture and this represents the ?buy now pay later? attitude which Americans ignorantly held - with consumer credit they were able to buy expensive commodities, however the inability to pay the loans back can be seen as a factor which led to the wall street crash in 1929. ...read more.

Although this is not within the 20s, the economic development in the war contributed to the prosperity in the 20s, because it provided the USA with the financial capabilities to offer increased amounts of consumer credit to consumers, it provided the funds for the technology and the methods of mass production and Taylorism were already well embedded throughout the course of the war. The war also saw the enfranchisement of women who were able to increase the size of the workforce after the ratification of the 19th amendment. Overall, although the motor industry played a vital role in the prosperity of the 20s by laying the basis for development of other industries, the extent to which the industry contributed depended on the technological advances in the form of electricity and mass production. Furthermore, without the popularity of consumer credit and the exposure provided by adverts, the motor industry would have never reached the heights that it did because without credit no one could actually afford to buy cars and without adverts the majority of the populace would not even know about the invention. Therefore, although the motor industry was a huge factor; it was a combination of factors which in unison provided America with economic prosperity. WWI however, is the main contributor because through the creditor nation established post war, America was able to build towards industry/consumer credit/adverts/mass production and consumer goods due to the fact that it had the funds and the morale of a nation of prosperity. ...read more.