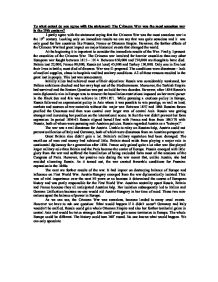 To what extent do you agree with the statement: The Crimean War was the most senseless war in the 19th century?

While pursuing a cautious policy in Europe, Russia followed an expansionist policy in Asia where it was possible to win prestige, as well as land, markets and sources of raw materials without the major war. Between 1857 and 1864 Russian forces pacified the Caucasus and then won control over larger area of central Asia. Russia was getting stronger and increasing her position on the international scene. In fact the war didn't prevent her form expansion. In period 1856-63 Russia aligned herself first with France and then from 1863-70 with Prussia, both of whom were pursuing anti-Austrian policies. Russia regarded Austria as a "betrayal". The war was a real disastrous for Austria. Unable to relay on Russian help, Austria could not prevent unification of Italy and Germany, both of which were disastrous from an Austrian perspective. ...read more.

This was of vital importance over the next 50 years or so because it determined the course of European history and was partly responsible for the First World War. Austrian neutrality upset Russia, Britain and France because they all anticipated Austrian help. Her isolation subsequently led to Italian and German Unification because no-one would aid Austria-Hungary in her time of need. These two new nations upset the balance of power in Europe. As we can see, the Crimean War was senseless, because leaded to many cruel events. However we have to ask one question: What would happen if it didn't occur? Germany and Italy wouldn't be unified, Russia could gain whole Ottoman Empire and also her further territorial gains in central Asia and would be twice stronger. She could even gain some territories in Europe. The whole Europe could be different. The history could turn 360� round. No one knows what would happen. We can only speculate. ...read more.